By Defeating My Enemies: A review 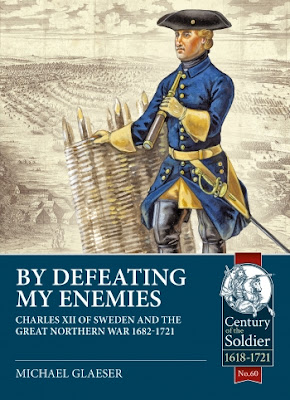 I have to say that I am very fortunate to be asked to review new books published by Helion and Co. This one is another excellent addition to the Century of the Soldier series and to the growing catalogue of books covering the Great Northern War.
Charles XII was, in my opinion at least, a complex and very ‘driven’ character. This new biography “By Defeating My Enemies” by Michael Glaser is No. 60 in Helion’s superb and rapidly expanding ‘Century of the Soldier’ series is I think the first such work published in English in more than a generation and goes a long way to unpicking his character in great detail. After bringing us up to speed on the growth of the Swedish empire in the 17th century, the book explores every aspect of Charles’ life as absolute monarch and as an exceptional (if not always victorious general), facing multiple foes and seemingly insurmountable odds, and sharing the depredations of campaigning with his men. We start with his early life where the author analyses how his experiences as a young man influenced him in later years. Every chapter of Charles’ military achievements is covered in great detail; his early victories, the fateful march through the Ukraine, the crushing defeat at Poltava and the many years in exile in the Ottoman Empire. The final chapters take us with Charles as he escapes from exile, his return, defeat at Ruben and his controversial death in the trenches outside Fredriksten in Norway. The analysis of this final chapter in his life is fascinating and particularly enlightening, presenting the differing views relating to the fateful shot and where it came from. I had always been of the opinion that Charles was killed by ‘friendly fire’, intentional or otherwise, but the unpicking of the evidence makes that outcome increasingly unlikely. The final chapter looks at Charles the man, and does so extremely well (so far as that is possible) covering such delicate subjects as his sexuality, religion and alcohol to name but a few.

This book is full of excellent maps, reproductions of contemporary prints and more recent black and white photos (including those of Charles’ remains when he was exhumed and X-rayed in the early 20th century). There are also a number of colour photographs of Charles’ surviving boots and uniform.

This is an excellent and scholarly book, one that is easy to read and informative. It will certainly find a place on my book shelves, as indeed it should for anybody interested in Charles and the Great Northern War. I can’t recommend it enough.
By Colin Ashton - December 04, 2020