Despite Destruction, Misery and Privations, a review.

I’ve now read this new book from Helion, No 61 in their ever expanding Century of the Soldier series. Actually I didn’t just read it, I devoured it. Amazing detail. Very easy and enjoyable to read. Well written. Fascinating, in depth and informative. This is the only English language book of its kind that I’m aware of, and the author Michal Paradowski has done a very thorough job indeed, consulting a huge range of Polish language sources to give us a superb description and analysis of the Polish-Lithuanian armies in their war against Sweden in Prussian between 1626 and 1629. 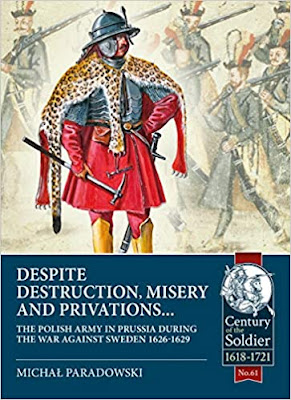 The author sets the scene nicely and presents us with a detailed analysis of the workings of Polish-Lithuanian Commonwealth, and the peculiar issues hinging on having an elected King. The many and various components of the army are broken down and described clearly, down to individual regiment and company levels in most cases. As always I am intrigued  by the contribution made by ‘British’ officers and common soldiers, including several well known figures  from the 30 Years War and the British Civil Wars.

One thing about books in this series that stands out is the quality and quantity of illustrations within each publication. This one is no different and it is jam-packed full of black and white illustrations, most of which are contemporary, and a centre spread of 16 pages of gorgeous colour plates showing examples of troop types found in the army, including eight detailing a great many Polish flags of the period, quite a few which I’d never seen before. The colour plates all come with handy descriptions at the back of the book. There are also some excellent maps outlining the campaigning against the Swedes. There is an extensive list of appendices including some muster rolls, details of garrisons and even a Polish to English dictionary as relevant to 17thC warfare.

This well-researched volume (judging by the extensive bibliography) is destined to take its place as the definitive book in English on the subject, so if this subject is of interest to you, this book should be your ‘go-to’ reference. Helion (and the series editor Charles Singleton) are yet again to be commended on their insight in fostering new authors and the choice of material they publish. Incidentally I know Michal is working on further volumes, including one on the Polish Army and it’s role in lifting the siege of Vienna in 1689, so I am looking forward to these immensely.

I’ve had to have a major rethink about the composition of my 28mm 17thC Polish army. I probably don’t have too many winged hussars but do need more Cossacks  and some Western infantry and cavalry, which I have somewhere in the depths of ‘the box of Doom’).