Every Bullet has its Billet: A guide to wargamimg the late 17th century. 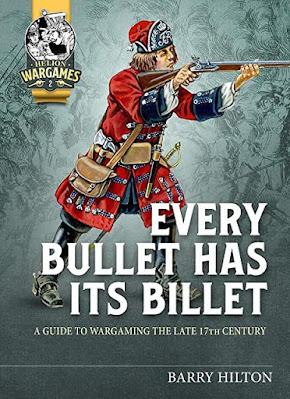 The second in Helion’s new ‘Wargames’ series ‘A Guide to Wargaming in the Late 17th Century’ is this offering by late 17thC wargaming guru Barry Hilton. Unlike the first volume in this series (which was a set of Wargames rules) this publication provides a broad overview of the scope of possibilities that this short period of time offers to wargamers new and old alike.
Now, I am no stranger to the almost 40 years of pretty much constant warfare encompassed by the book, but I still found it to be an interesting and engaging romp through the period. While I may not have learnt anything new, the mouth-wateringly gorgeous colour photos of the author’s extensive collection of figures and ships make up for this ten fold.

However, (and this is a good however), I would suspect that the projected audience for this book falls into either the same camp as I do (grizzled curmudgeonly gamer/collector) or much more importantly, those new to the period or indeed new to historical wargaming. For the latter group, the author has produced an impressive ‘go-to’ manual of all things late 17th, with an extensive signposting service to further, more detailed, reading on the subject, and to the enormous range of wargames resources (i.e. little men, little, and not so little, ships, flags, rules and gaming accessories) that are available.

So what’s inside the covers? We are given a brief historical primer covering the numerous wars that took place at the back end of the century, encompassing not only Western Europe, but Eastern Europe, the Caribbean, India and the war at sea. Subsequent chapters cover the various armies, gaming the period, and suggestions on how to go about building up and using your armies. Then we have a troubleshooting guide of ‘how to’s’ and ‘how to avoids’, such as, to name but a few, basing, how to avoid warping, the use of bayonets, button colours, the cut of clothes and how many flags to use. Barry and I share a preference for over-sized flags and the rationale behind this is explained. Important to many is the compatibility of different figure ranges, and how to make best use of them. I did rather like the section on how to go about building and painting a fleet of 1/2400 (?) scale warships? It is most refreshing to note that unlike some wargame rules and ‘guides’ tied perhaps to a particular manufacturer, the author doesn’t shamelessly promote his own figure range, but suggests how to make the best use of the bewildering number of figures and sculpting styles out there for the newbie gamer.

Of course, without photographs this book would still be interesting but it would be dull, and dull it most certainly is not. The multitude of colour photographs are simply gorgeous, and following on from my earlier observation, include figures from a wide range of different manufacturers, all of which are beautifully painted and photographed. There are also a number of handy maps and some lovely pencil sketches of some of the troop types prevalent in the period.

Overall then this is a nicely written, easy to read and well researched introduction to the period. The author’s views are of course his own, but there is nothing to disagree with and much to applaud. I recommend it without reservation. Helion, in the form of series editor Charles Singleton are to be commended yet again for launching this series. In case my wife reads this, the book will not inspire me to buy more figures to add to my own collection for this period (but it will inspire me to finish some of those many that I already posses in the 'Box of Doom'.