Almost an antique! (and I’m not referring to myself here) 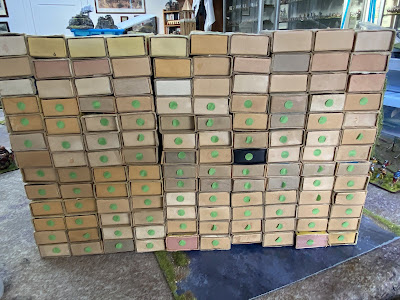 This relic of the past has been in my possession since the early/mid 1970s, so I’m surprised it’s not fallen to bits even more than it has, given it was jammed under my table, long forgotten. This matchbox campaign chest has seen much use, and growth, over the decades, especially in the days before we had technology that could help with the running of a campaign.

As anyone who is familiar with one of these will remember, the match boxes each represent a square on the campaign map. Players take it in turns to secretly move the units of their army, represented by a chip or token that is moved from one box to another as it marches around the map. If an enemy token is found when opening a box to move your own token then contact has been made. Simple and an effective way of allowing for hidden movement in a campaign without the need for an umpire.