Bullocks, Grain and Good Madeira - the Mahratta and Jat campaigns 1803-1806 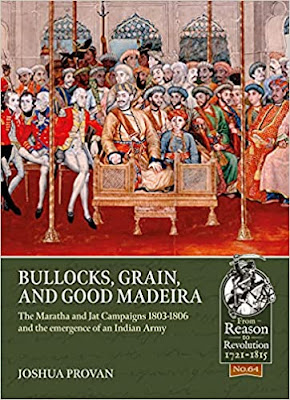 Deep down in the recesses under my games table I have a large box full of unpainted figures for this campaign, Europeans, Sepoys and Mahrattas, the full shebang. I bought them when there were some silly “ignore ‘em at your peril or regret it!” sales from AW Miniatures. I wasn’t planning on doing anything with them for six months or so but this book might (will) just tip me over the brink of sanity and derail my ‘plan’ if I’m not careful. I can always rope in a load of my Sikh irregular infantry and cavalry to pad the numbers out……
This is one of the latest books in Helion and Co’s excellent and growing ‘From Reason to Revolution’ series. ‘Bullocks, Grain and Good Madeira, the Mahratta and Jat Campaigns 1803-1806 and the emergence of an Indian Army’ is another subject about which I have a great deal of interest but not the in-depth knowledge I have of other periods and campaigns.
The book is well written and after a brief chronology to help put everything in context within a wider world, not just in India,the various troops types, ie the Europeans (Crown and Company), East India Company Native Sepoys and the Mahrattas, are discussed, with details relating to dress, training, effectiveness and organisation. This was the period when the Presidency armies of Bengal, Madras and  Bengal were coming of age as an ‘Indian Army’ in the eyes of the Crown and the East India Company. The information relating to the European-trained and led sepoys in the Mahratta armies is especially useful, and these hard fighting troops were to prove to be more than a match for the ‘British’ forces facing them. This section is underpinned by the excellent colour plates in the centre of the book that provide us with some great example of uniforms of the regular troops and the various states of dress of the irregulars. Many of the plates are taken from private or public collections, and all are excellent depictions of the regular and irregular troops  engaged in the campaigns, but four pages contain gorgeous originals by Patrice Courcelle.
The narrative then takes us through each of the campaigns, in the Deccan, Hindustan and the Holkar and the failed siege  of Bharatpur. The focus is very much on latter, plus the battles of Assaye, Argoan, Laswari and the fighting outside Delhi receive good coverage. Some detailed maps of the manoeuvres during the campaigns and major engagements are very helpful when following the course of events, as are the orders of battle. As usual the use and inclusion of quotes from primary sources is enlightening and helps draw one into the narrative.
At the end of the book are three excellent detailed orders of battle; one for a relative newcomer to the history books called Wellesley and his army at Assaye,  another for the Grand Army of the Doab under General Lake, and sandwiched between the two, one for the regular army of the state of Gwalior.
Overall I found this book full of useful information, clearly well researched and presented in such a way to allow the course of the campaigns to be followed easily for a relative novice to the subject like me. The supplemental stuff regarding uniforms and organisation is useful, although whole books could be (and have been) written on the subject! I’d recommend this book both for anyone wanting an introduction to the period and to wargamers interested in refight of the wars.
By Colin Ashton - August 12, 2021