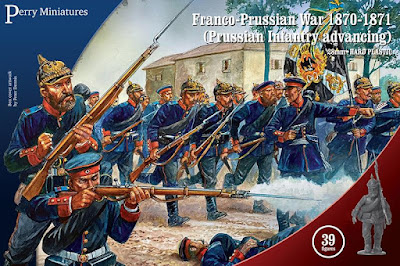 I needed (?) to build up another sthree battalions (plus) of Prussians to complete my Corps for the 1866/1870 collection, so the release of this pair of boxed sets came at a very opportune moment. I ordered the three-box deal purely to get the ‘free’ mounted officer; two boxes of the advancing set and one of the skirmish line set. The contents are essentially the same, but with more firing line types in the skirmish box and more marching or running at the trail in the other. Body, head, two arms, half a blanket roll and for some a bayonet-come-pioneer tool of some sort are all the parts there are to stick together, and of course there are the bits to do an officer, standard bearer, bugler and drummer as well. It’s possible to use one of four styles of headgear; forage cap, two styles of picklehaube and a Landwehr shako. This latter option also opens up the possibility of creating not only Prussian Landwehr but units representing troops from the German Confederation during the War of 1866, my main area of interest.
I use battalions of 20 figures, so 60 figures for a regiment, plus some extras for a skirmish line, so three boxes isn’t enough for a full brigade. However I’m sure the command sprues will become available separately at some point soon, or I can use some spare metal command figures. Ironically, these plastics fit in perfectly size and style-wise with the old Helion/current North Star 1866 range as they dwarf the older Perry sculpts produced for Wargames Foundry back in the day.
Despite initially wanting to do three regular battalions as noted earlier, my first battalion has been built using the Landwehr head option.
I’m taking the lazy approach to starting these by using a Prussian Blue spray primer, but why not? It’ll do amd it’s one less job to worry about. Incidentally these Landwehr are destined for a refight of Langensaltza against the Hanoverians at some point in the future. Before then they’ll no doubt appear against the Federal German forces along the River Main.  I just need to paint Hanover’s finest of course! 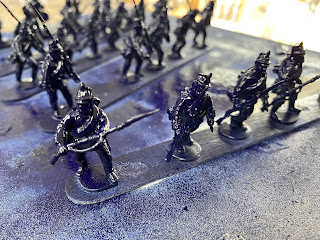 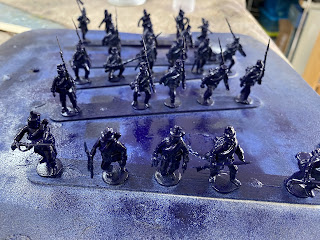 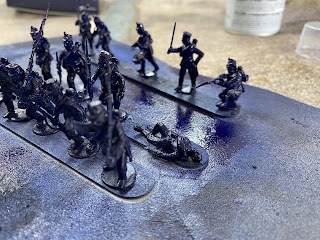