History of the Damas Legion 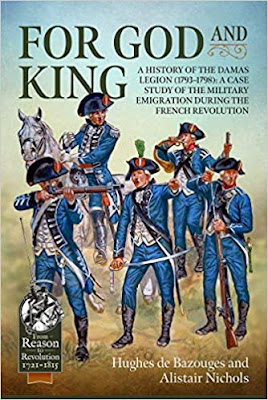 ‘For God and King’ by Hughes de Bazouges and Alistair Nichols is a history of the Damas Legion between 1793 and 1798 during the French Revolution. Not as an obscure subject as one might first think to the uninitiated.
It is a big book by Helion standards, over 300 pages, but this amount of space is needed to tell the story of the birth of the regiment and its campaigns, and sad end for many of its members, against the French Republic.

Raised by Etienne de Damas-Crux in 1793 as part of the Armee des Princes for service in the army of the United Provinces, it was to be formed as a ‘Legion’ with infantry and cavalry elements. After the Flanders campaign of 1793-94 and the defeat of their Dutch paymasters in 1795 the survivors transferred to English service. The infantry met their end at the ill-fated Quiberon expedition, victims of the savage reprisals acted upon them by the Republic, but the cavalry, regiment served in the Emigre Army of the Conde in Upper Germany and Switzerland in Russian service this time under its disbandment in 1798.
This book is a beauty, and an absolute must for anyone interested in the French Revolutionary Wars and especially the role played by the Emigre armies and is a fascinating study of a neglected aspect of the conflict. It is well written and is packed full of detailed information, taking us through six or so long, savage and intense years of fighting. The book has clearly been extensively researched using primary and secondary sources, and in telling the story of the Legion is full of excerpts from contemporary accounts and first hand witnesses testimonies to the events. The authors provide us with detailed information on the organisational make up of the Legion, and on the various Emigre armies of which it was part, with several orders of battle which are new to me.

No Helion book such as this would be without a centre spread of colour images and this is no exception, with 16 pages bursting with depictions of the soldiers of the Legion in the various iterations of uniforms worn throughout their existence, together with a dozen really useful maps dotted throughout the book outlining the various theatres of operations. More uniform information can be found in the appendices, as can further details of Emigre orders of battle.

The Wars of the First and Second Coalition’s against Republican France are an era of significant interest for me, and this book has given me great pleasure in reading it as well as some quiet thought about what made so many men serve in Emigre regiments in the knowledge that capture meant almost certain execution. This book deserves a worthy place on the bookcase of any French Revolutionary Wars buff!
I already have the legion in my 28mm collection but perhaps I should expand it a little……
By Colin Ashton - August 03, 2021