No game last weekend or indeed this week, and only some more Goth cavalry and infantry finished so not a great deal worthy of a post, hence this review of a rather splendid book that’ll fire me up to game the period again very soon. 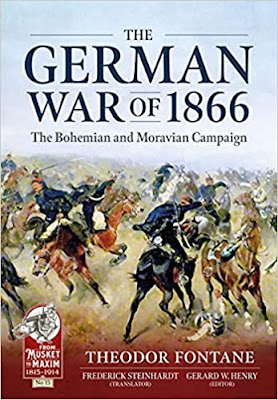 In a rather serendipitous way, this book’s release coincides nicely with the Perry twins’ plastic Franco-Prussian War boxed set (with the option of giving the figures the earlier style picklehaube), so what we really really need now are a set of plastic 1866 Austrians at some point in the not too distant future. No chance really, but then I already have two full brigades of Austrians and one of Saxons, plus cavalry, to face off a corps of Prussians plus some allied German battalions.
So, on to this book. ‘The German War 1866’ covers the Bohemian and Moravian campaigns in what is commonly and erroneously referred to as the Austro-Prussian War. It is the first and only unabridged translation of Theodore Fontaine’s classic, Der deutsche Krieg von 1866, first published in 1870. This study covers all of the major and minor battles and actions between the Prussians, the Austrians and their Saxon allies in Bohemia , Moravia and Galicia in what was to culminate after a few short weeks at Koniggratz, which saw the destruction of the Austro-Saxon army and the ascendancy of Prussia in Germany in one final massive and cataclysmic battle. This war is a subject I know a great deal about, and despite this prior knowledge or even because of it, this is an absorbing read. I think understanding the subject is helpful but the narrative is such that a reader unaware of the details of the campaign would find it equally informative and enjoyable. The origins of the war, a commentary on the plans and areas of operations together with detailed accounts of the fighting are covered in three parts. Book I: The Origins of the War; the Elbe Army and 1st Army at Gitschen, Book II: The 2nd Army to the Upper Elbe from 1st to 3rd July, and Book III: Koniggratz and After. The book contains a significant number of orders of battle for the different actions, together with reproductions of the original sketch maps, which I found helpful, and many contemporary black and white illustrations.
It’s always a funny one reviewing the translation of a 150 year old book. Is one reviewing the original or the efforts of the translator? In this case the answer is an easy one. The editor Gerard Henry and translator Frederick Steinhardt have produced what has clearly been a labour of love. I’ve not read the original German but this translation seems very sympathetic and reading the book and compiling this review has been an easy and pleasurable experience. The original author’s use of what must have been very fresh memories for all of the personal reminiscences is, I feel, especially compelling. The more than occasional bias from a very patriotic Prussian is an amusing aside from the main narrative.
The original has been oft-cited as a key source in pretty much every history of the war to date, and this English translation should occupy a similar place of prominence providing access for a much wider group of readers with an interest in the subject. Helion are to be commended for commissioning this excellent addition to their ‘Musket to Maxim’ series. Highly recommended.
I do have a game planned for this coming Saturday 14 August, so I shall be reporting on the outcome shortly afterwards.
By Colin Ashton - August 09, 2021