More Guests to The Burrow and Some Cruel Dice Throws.

A very long-planned visit took place this weekend when my mates Tim, Barry and Bruce from the Like a Stone Wall Wargames club called in for a game, joining some of the usual crowd of Conrad, Paul, Neil and Nigel.

This week the game was to be yet another Ancient one, pitting the Late Romans of Maximus Parmo against the Goths of King Swarfega. (NB we shall be giving Ancients a rest for a few weeks while I sort out and commence the Late Roman campaign I’ve been working on for the lads instead of renewing the French Revolutionary Wars campaign from last year, so next week will be another period entirely).

Conrad, Paul, Neil and Bruce took the Romans while Nigel, Tim, Barry and me were the Goths, my collection slightly augmented by some of Tim’s figures to balance the sides out.

No finesse was to be required from the Goths, who, as a ‘point and shoot’ army packed their centre with infantry and with hindsight made an error in splitting their superior numbers of cavalry between the two wings. All the Goth light troops were also massed on their left, which seemed like a good idea at the time, but that left the other flank with no missile capabilities whatsoever.

Here are some photos of the game, hopefully in the correct order of events. The other end of the table is a long way away when you’re concentrating on what’s going on in front your own troops. Ive not put captions on the photos as they're all pretty self explanatory, i.e. Goths advance, Goths get comprehensively duffed up, Goths retreat. Endex! 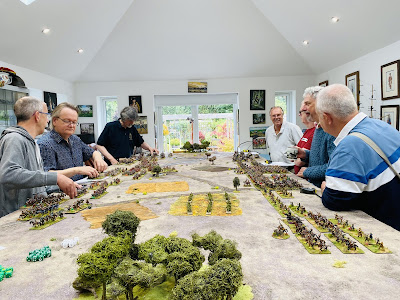 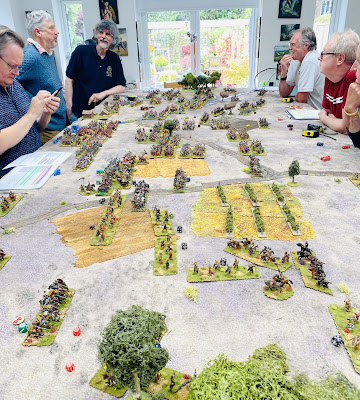 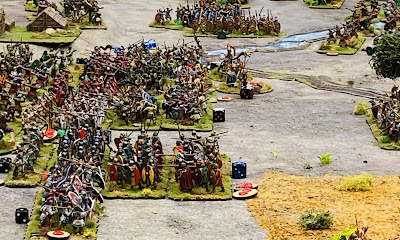 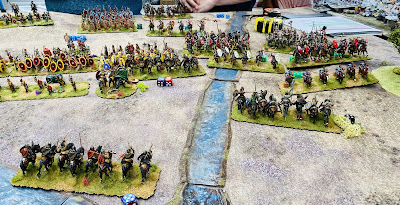 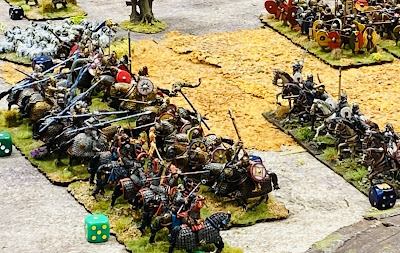 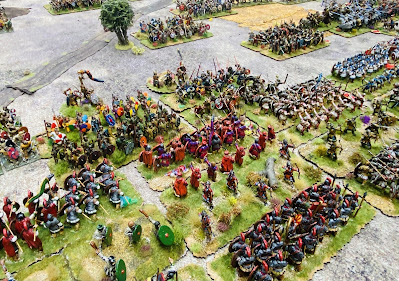 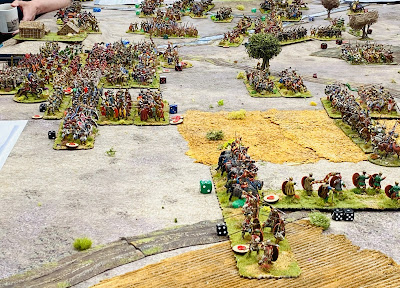 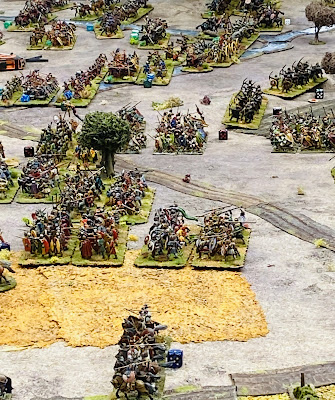 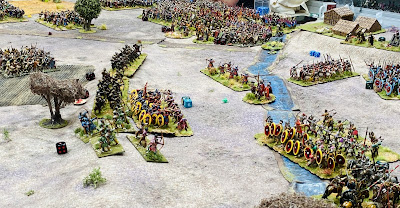 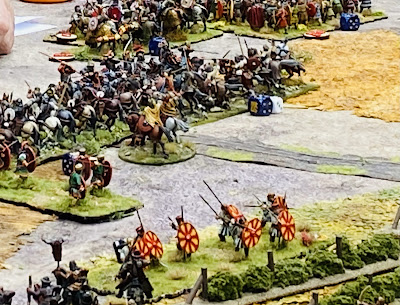 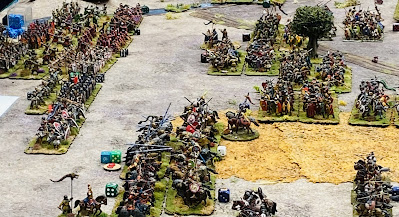 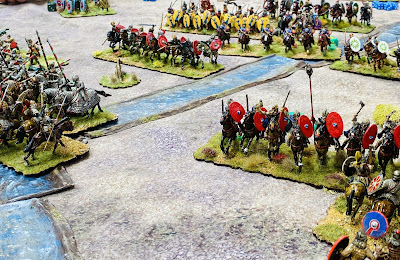 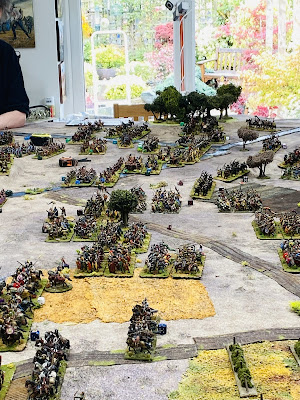 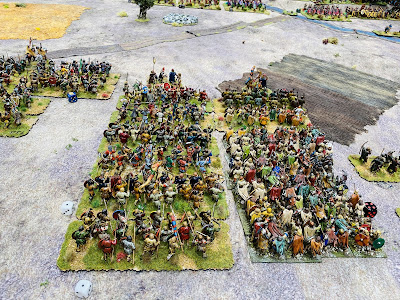 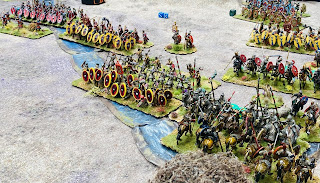 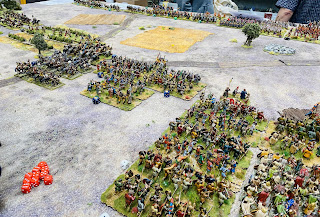 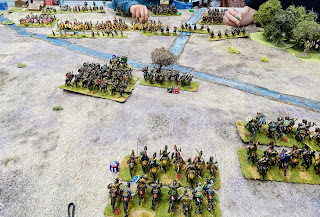 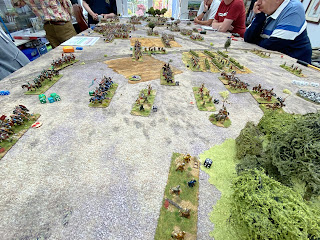 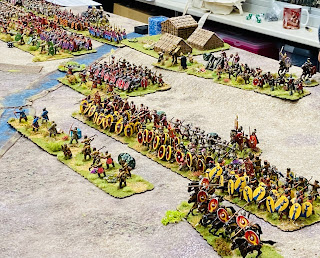 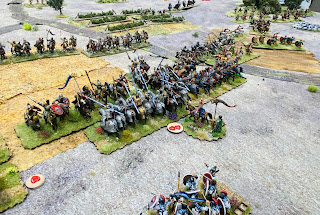 The Goths were hit by a bad case of diceorea and couldn’t throw more than a 1 or 2 most of the game. That put paid to the execution of an excellent plan…..

The Goth right wing cavalry under Barry charged towards the enemy and remained locked in combat with Paul, and was unable to make any headway whatsoever against either the Roman cavalry or infantry, as well as being peppered by Conrad's Roman war engines on the hill, and in no time at all, i.e. by shortly after the lunch break, Barry's command was destroyed, the surviving units forced to retreat.

Our left under me was wholly composed of skirmishing types, and despite my best efforts in knocking several units out of the game the Roman right under Bruce held on all day and eventually broke my command as my archers failed to make any impression on his cavalry!

In the centre Nigel and Tim launched all nine Goth warbands towards the Roman line, supported by some cavalry and more archers. It was a splendid and stirring site. For a turn or two at least. They never seemed to have enough dice to keep everyone moving and three warbands fell behind and never engaged. The others made a mess of some Romans in the first line but eventually they were worn down and destroyed. The Romans were very lucky with their 'thrown weapons' prior to contact and managed in most cases to cause a hit on the Goths, rendering them 'unfresh' and therefore less deadly.

Tim's cavalry smashed up some Romans and killed Bruce, but they too were overwhelmed. Not by numbers or tactics, but by throwing dice that only scored 1's and 2's!

That was that. With both flanks smashed and the centre in tatters the Goths conceded defeat. The armies were actually both around 1250 points using the system in the rules so I can't even say they sids were unbalanced.

IMHO the Goth cavalry should be at least the equal of the Roman equites but they suffer in the rules for being less well armoured. Why? I don’t know but easily remedied. I’m changing that at once and making them ‘Armoured’ like their enemies. Makes sense as, a) they were by this stage able to get their hands on lots of Roman equipment and b) it feels right. My toys my rules. I already differentiate where possible between armoured and unarmored Legios and some Roman cavalry units, depending solely on whether the figurers are armoured or not, so I may start by giving maybe half the Goth cavalry armour and see how that works. I still have quite a number of figures to complete for both sides. For example, including the Atlantic plastic Romans on order I have six Legio, one cavalry unit and some archers for the Romans and four or five more Goth cavalry units, another couple warband infantry, three units of medium infantry archers, plus a fortified camp.

Barry has kickstarted my Sassanids and painted four cavalry and two or three infantry units. I have a Cataphract and Clibanari unit done myself but none are based up yet. The Romans and Ostrogoths/Visigoths/Vandals must be done first.

Anyway, the game was a great success and everyone enjoyed the day. The vegetarian chilli and trimmings went down very well too, judging by the absence of enough in the pot left over my my supper!

No game now until 14 August unless an opportunity crops up next week, mid week.