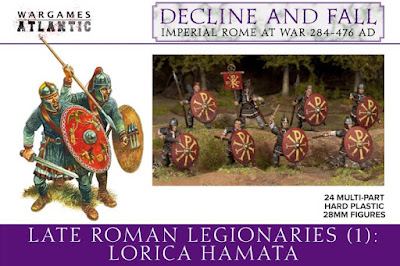 Like I have enough Late Romans, but I thought I ought to buy a box or three of the nice-looking figures just released by Wargames Atlantic and see what they’re like.

What do you get? There are 24 hard plastic legionaries in the box, with a wide variety of headgear and weaponry, plus the option of making a musician, officer and standard bearer. I particularly like the    arm options allowing you to depict your legionaries throwing their Spiculum or Martiobarbuli/Plumbatae. The torsos are all pretty much in the same position but there are enough arm options in the box to disguise this. The variety of heads is also good, ranging from the Panonian cap to various designs of helmets, including Spangenhelm and more traditional looking Roman styles. Plumes and crests can be added should you wish. It is also possible to use these figures to represent Ostrogoth/Visigoth infantry as they were armed and equipped much the same as yer typical Roman squaddie due to the acquisition of captured equipment and production centres and the fact that many of the Goths had been serving with the Romans in one form or another. 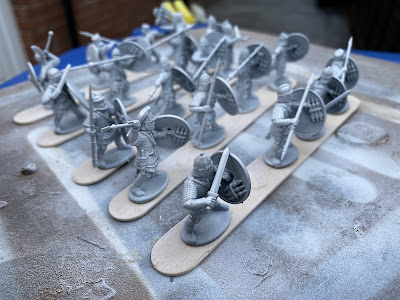 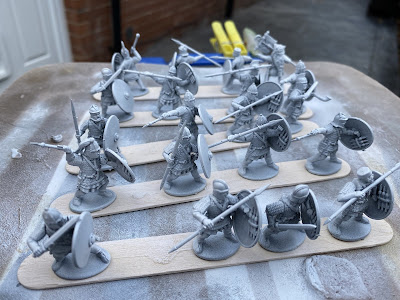 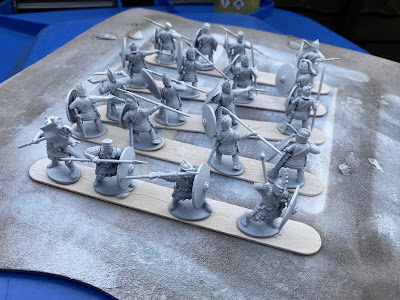 A couple of things I really don’t like. Although the shields are lovely, with a row of plumbatae moulded into the back of the shields, the shields themselves are very big, way too big in fact for any of the currently available Late Roman shield transfers, for example from Little Big Men Studios. Thankfully, there are plenty of shield designs that we know of that were pretty plain, or that we know nothing about at all, and therefore easy for a ten-thumbed painter like me to reproduce or make up. The other minor irritant for me anyway is the fact that compared to other hard plastic manufacturers’ figures, there are a lot more points of contact with the sprue, so for instance an arm holding a spear might have five points that need cutting and trimming away, which for an impatient person like me is annoying. There also doesn’t appear to be an arm option for the draco or vexillum, unless you chop the end off one of the spears, even though that results in quite a short staff.  The figures do go together really well and look good when ranked up. Overall then I do rather like them.

I just need to paint this unit, which I think will be a Bucellarii legion for my commander Maximus Parmo, and then work on the other box, perhaps as well-armed Goths of some description. I wonder what WA will bring out next in this range? Probably Goths, or some army builder deal, which means I’d end up buying more troops that I already have enough, but hopefully it’ll be something different like Sassanids (which I already have enough of as well but not painted). I live in hope, but my breath is not yet bated!