The New Knights. Another great book from Helion 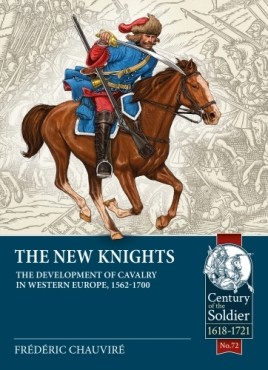 Being a pretty straightforward sort of bloke it never occurred to me before, but I probably should have mentioned this a while ago, but when I’m blogging about books from Helion it’s because very often, but not always, they’ve very kindly sent me a copy of a new publication to review. Cynics might suggest or mutter quietly to themselves that I’m therefore bound to give a glowing review as I get the books for free. Not so. If I really like a particular book I will say so, which is pretty much always the case across all the series I’ve been involved in on this basis. Add to that the fact that I’ve yet to come across a Helion book I didn’t like, even if in the early days some of the translation and editing was a little bit dodgy. It’s the subject matter that counts surely? And weirdly some of their best and most enjoyable books have been on subjects about which at the time I had little interest in, but now, to the detriment of my bank balance, I do.

If I wasn’t so keen then my review would be more ‘matter-of-fact-like’ if you get my drift. Not damned by faint praise but less of the oozing superlative perhaps. But enough of that unnecessary attempt to justify what I think and write. They (the Helion gang) do a fantastic job bringing new authors (often non-English speakers/writers as a first language folks) onto the scene, covering all manner of often (very) niche historical subjects, or authors putting a new spin on old subjects, in a torrent of publications almost every month. For this they should be applauded.

The latest book in the ‘Century of the Soldier’ series is one that I can and will freely and of good conscience say good stuff about. The book looks at the development of the employment of cavalry from the Italian Wars of the sixteenth century to the rise of the armies of Louis XIV and the War of the Spanish Succession at the start of the eighteenth. The focus and detail are very much, but not totally, French oriented, which given the nationality of the author is understandable and perfectly ok in my view as the key roles played by the Dutch in the late sixteenth century, Gustavus Adolphus, Charles XII and Louis XIV in the seventeenth, the impact of Holy Roman Empire’s exposure to the Ottomans, and the tactical use of cavalry by Duke of Marlborough in the eighteenth are also examined in detail within the overarching French context.

One has only to look at the content of this volume to see that it has been exhaustively researched, with an impressive array of primary and secondary sources. We are taken on a journey from the introduction of firearms both mounted and on foot, and the ultimate demise of the fully armoured and lance-armed gendarme, with all the major tactical changes that evolved as a result, through to the solid ranks of late seventeenth and early eighteenth century heavy cavalryman who relied on either fire or shock tactics. How these different tactics evolved is examined in great detail, and their impact on the bigger picture of battlefield deployment and changes in the overall usage of the cavalry arm is discussed, proposing the pros and cons of firepower against shock, and indeed what exactly these diametrically opposed tactical methods meant on the battlefield, especially when they faced each other on the same piece of turf. Also discussed are the ways these developments impacted on infantry, in terms of how they dealt with the changing tactics of the cavalrymen and how the cavalry evolved to combat the evolution of predominantly musket-armed foot.

The author examines the processes of recruitment and training in the French army, not just of men but also horses, as well as the significant changes seen in personal protection and weaponry and the move from the use of companies to squadrons as the basic organisational and battlefield unit. We are treated to a number of theoretical case studies that examine the basic tactics, and several real battles, such as White Mountain and Rocroi in the 30 Years War, Dreux and Ivry at either end of the French Wars of Religion, and finally Blenheim, that are used as exemplars to demonstrate how these theories evolved and were put into practice.

Well written and sympathetically translated and edited the author has provided the reader with a comprehensive examination of what is a fascinating subject. The reader may not necessarily agree with the author’s theories but they are well argued and backed up with compelling research, resulting in what is an engaging and thought provoking reading experience. Nicely illustrated throughout, with some helpful maps that link well to the narrative, there is much to commend this excellent book.