This Saturday I offered yet another different period for us to game. I decided I’d do something never done before here at the Burrow, so decided I would put my Franco-Prussian War French against my Austrians-Prussian War Austrian and set up a fictional encounter between the French and Austrians somewhere in Northern Italy. I do have the figures for some Piedmontese troops but they’re way down the painting queue at present. Now before any button counters step in, I am perfectly aware that the uniforms for the Austrians are wrong as they should not be wearing their greatcoats, but that really doesn’t matter. If anyone thinks it does I’m sorry for you.

I worked out the Black Powder stats and characteristics for each army, allowing for ponderous Austrians with mainly rifled muskets but smoothbore artillery, and ensuring the French elan and superior artillery was reflected somehow. The French infantry mostly have rifled muskets again with some smoothbore muskets. Some of the Austrians were less than enthusiastic battalions of Italian-raised troops.

Both armies will be entering battlefield divided into two or three commands, the objective being for the French to secure the ground to anchor their main army’s flank while it manoeuvres around the Austrians. The Austrians need to deny the French their objective and by doing so will be able to strike the main French army in the flank. 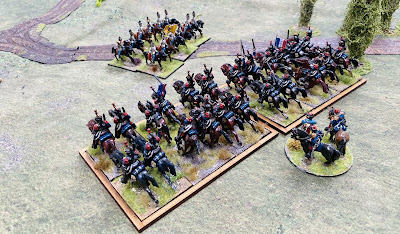 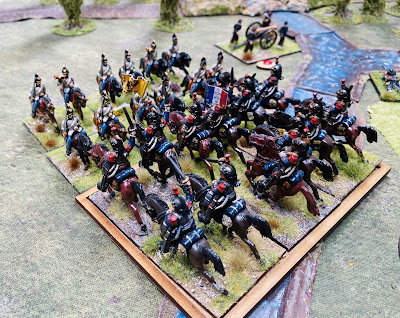 So ended the game, with the bloody French repulse on one flank, the slow advance on the other and the loss of most of their cavalry signalling an Austrian victory. It was actually quite a close run thing, and it was good to see everyone playing the period rather than the rules. It was an enjoyable game with some very colourful troops, and if nothing else it'll be an incentive to paint up my Piedmontese division. I've only had them in a box for a dozen or so years!