No game this week as a routine hospital appointment I originally had for a few weeks time was brought forward to today courtesy of a cancellation. Well, much as I would never slag off the NHS and support them and the impossible job they do, “get ‘em while you can” is the cry when it comes to appointments. As I say nothing to worry about other than my back/spine problem is deteriorating but what to do? Keep gaming and stay happy is my response. Normally works. 😊

Yes, I did indeed finish a fair few odds and ends and my butterfly brain went into overdrive. First up are two battalions of Nassau infantry for 1866. When I first embarked upon this project I planned to concentrate on the campaign on the River Main in the west.  Well, I didn’t stick to that one but never mind. Nassau provided two regiments (four battalions) of infantry and a battalion of jäger plus some artillery to the Federal VIII Corps. They saw action at the battle of Auschaffenburg. These figures are from Irregular Miniatures and are actually Austrians but they work nicely imho. I just need a suitable skirmishing figure to represent the jäger in their nice black uniforms. These figures have a rather pleasing Ruritanian look. 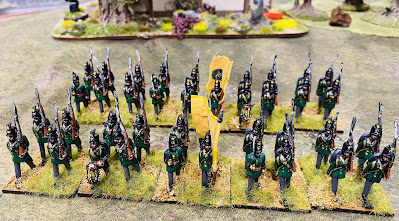 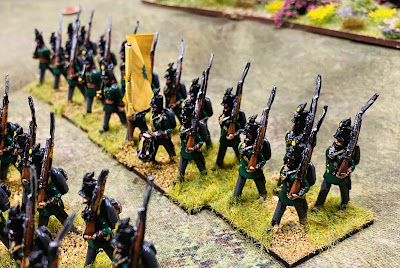 I’ve decided to finish off all my 1866 stuff and complete the units for the Federal VIII Corps that I don’t yet have (that means some more Nassauers to but amd Baden and Wittenberg to paint from the lead pile), and maybe some more Bavarians for the VII Corps when Wargames Atlantic bring their plastics out.