This weekend we played a Thirty Years’ War game, but no cute puppies or kittens.....

Yes, for the first time since 2017 my Thirty Years’ War collection was dusted off and sent into action. They’re not large armies compared to some I own, but they’re still very colourful and appealing to the eye if I say so myself. Well over half of the figures are Warlord plastics, the remainder being TAG (the best), Foundry, 1st Corps and Bicorne I think. This whole collection was on my 'to sell if I don't use 'em' list for a while, but not any more.

I decided to use Warlord’s Pike and Shotte rules and the TYW supplement The Devil‘s Playground, exactly as they were written, the only exception being that troops could only shoot if they moved once rather than up to three times. P&S split a battalia down into three separate units, two shot and one pike. Much debate has been had about whether this is ‘right’ or not, but I suspect that wings of shot did operate separately of their parent pike block when required to do so. My Swedish regiments have three bases of shot to give them a slight advantage in firepower, in theory. Readers please note that this week there are no cute puppy or kitten photographs. 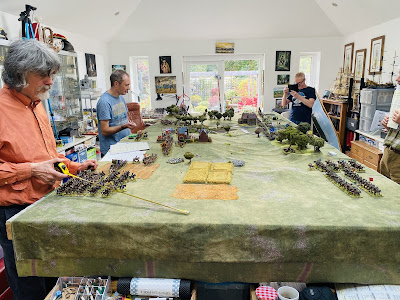 Conrad and Nigel were Swedes on the right, while Paul and John took command of the Catholic League army. I didn’t play but umpired and gave occasional ‘advice’ as well as being in charge of the commissariat, and calling the shots regarding any queries or rules queries/challenges, of which there were barely any. The objective wa for the Swedes to capture the hill and the roads leading off the Catholic table edge. The Catholic League not only had to prevent this but also had to defeat the Swedes. Just hanging on to the high ground wasn’t likely to work in the face of aggressive Swedish tactics, so some aggression of their own was going to be required. The Swedish infantry were superior to most of the the enemy foot, but the Catholics had much more cavalry, especially cuirassiers, and had superiority in artillery…..not that it was to matter in the end. As usual, I hope the photos and captions will tell how the battle unfolded.

The Catholic League plan appeared to be to hold the centre and refuse both flanks. They had deployed Croat cavalry as speed bumps on their left with their heavy horse held back. On the other flank were 11 squadrons of horse. Their seven infantry regiments formed up in the centre, with one brigade on the hill and the other slightly offset covering the open right flank. The Swedes’ plan was to punch through the centre while pinning the enemy cavalry on each wing. Subtle it was not.

At this point we agreed to call time. The Swedish left was effectively destroyed and their right wing cavalry wasn't making much progress against the League apart from seeing off the rest of the Croats. However, several squadrons of horse damaged earlier (including the dreaded Finns) had recovered and were now ready to rejoin the fight.
In the centre though the League had disintegrated under pressure. It was not however a Swedish victory as despite everything there were still maybe ten squadrons of League cuirassiers and harquebusiers plus three untouched regiments of foot swinging slowly round from the right. The only Swedish reserves would take time to come up and cover their exposed left, but based on Paul's dreadful command dice scores they'd probably get there with time to spare! We all agreed that all things considered the battle was a somewhat costly draw.
Everyone enjoyed the game. However, the supplement suggests Swedish foot should be stubborn. Thats too much of an advantage, so next time I will use another way to reflect their determination, probably by adding one to their stamina. I think we were all more or less ok with the rule mechanics, but agreed that overall the stats and characteristics in the rule book and supplement need some informed tweaking, which we shall do for next time.
It was good to get this lot out on the table again after such a long break. I do have a couple more Imperial and Saxon units but couldn't find them, but they'll be somewhere under the table. Thanks to everyone for taking part. Next time I am determined to play.
Next Saturday, another game and an other period......
By Colin Ashton - September 20, 2021