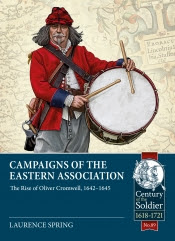 If the English Civil Wars are your 'thing' then this is another book for you. Helion have published yet another excellent book, yet another in a long line of books examining well known and less well known aspects of the Civil Wars.

So, when one comes across references to the Parliamentarian Army of the Eastern Association the first thing that springs (no pun intended.....ok it was) to mind is the Battle of Marston Moor, followed secondly by a certain Oliver Cromwell esq. This however is but the tip of the iceberg in terms of its impact on the progress and outcome of the First British Civil War.

The Campaigns of the Eastern Association: The Rise of Oliver Cromwell, 1642-1645 by prolific author Laurence Spring is another fine addition to Helion’s Century of the Soldier’ series. Using previously unavailable sources, namely the private papers of the Earl of Manchester, the author has been able present an in depth study of the military and political events the Association faced during its relatively short but eventful existence.

Obviously, the path to Marston Moor figures strongly in the narrative but before then the army was involved in purging the eastern counties of Royalist forces and individuals. After the victory of Marston Moor there was more campaigning culminating in second Newbury. The author doesn’t just focus on the military aspects but also provides a fascinating insight into how politics, religion and to a degree personal ambition effected the army and ultimately led to the creation of the New Model Army.

While learning about the activities and lives of the senior officers is aways interesting, the book gives us more, with a far more interesting look at the lives of the common soldiers and their experiences of the war. This is quite a hefty book, so there is plenty of space to take the reader through the events of the Civil War as experienced by the Eastern Association Army from the early days through to final campaigns in the West Country.

The book is very well illustrated with useful maps, some orders of battle, numerous contemporary black and white images and a colour centre spread of examples of colours and cornets carried by units of the army. The appendices include a detailed description of the organisation of the army and a reproduction from the journal of a member of Montague’s Regiment of Foot, showing their activities and movements.

In short, I thoroughly enjoyed reading this book. It is a tremendous addition to the Helion catalogue and is yet another from this author that is deeply researched and well written; it is surely a must for anyone with an interest in the Civil Wars.
ISBN 978-1-915113-98-6, Softback, 240 pages.
PS anyone else noticed that the drummer on the front cover is left handed?
By Colin Ashton - September 21, 2022