ONE KING! A Guide to Wargaming Argyll’s and Monmouth’s Rebellion of 1685 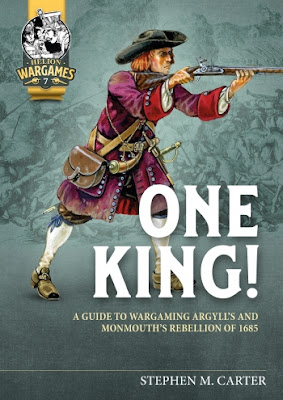 The latest from Helion in their ‘Wargames’ series is this comprehensive, rather hefty and totally inspirational offering. The Monmouth Rebellion is I am sure we’ll known to many people in the UK; anyone of my generation might also remember the 1970s Harlech TV series ‘The Pretenders’ (available on DVD still).

But I digress. For a short lived and bloodily extinguished rebellion this ill-fated campaign had always been on the fringe of my interest in the wars of the last quarter of the seventeenth century, as not having much potential from a wargaming perspective. How wrong was I? Having read this book I am pleased to say that author Stephen M. Carter (author of ‘Fighting for Liberty, Argyll and Monmouths Military Campaigns against James II’, also published by Helion) has done a splendid job in bringing the campaign to a wargames table near you. The book has everything one might need, with lots of useful pen pictures of the senior and many junior commanders, the troops, uniforms, flags, and a clear and detailed narrative of the campaign in both the West Country and Scotland. And there is of course a great deal of effort spent outlining the numerous skirmishes and (much fewer) pitched battles, with maps, orders of battle and detailed narratives of the actions.

Aimed at wargamers, the book certainly provides everything needed for the period to be brought alive on the tabletop. As if that isn’t enough there is also a simple but well thought out and engaging mini campaign guide with scenarios for the actual encounters and also several ‘what if?’ scenarios of battles that might have been.

The book is beautifully illustrated with numerous photographs of very nicely painted wargame units, lots of colourful maps and detailed tables of the orders of battle and several pieces of artwork by Patrice Courcelle. The wargame campaign section is spot on, and includes helpful information on garrisons, dispositions and typical movement rates, together with insights suggestions on how to rate the different troops and commanders.

I cannot fault this book. It does what it sets out to do in a way that is easy to follow, whether already an enthusiast or someone with a passing interest. As I said at the start of this review, an inspirational book.