This week our game was another using my 1672-78'ish collection with a shift in geography from the Spanish Netherlands south to Piedmont. The French have yet again encroached across the border with Piedmont to provide support for the hard-pressed Waldensian communities living in the north of the duchy. Being Protestants they're not exactly popular or welcome and have been under almost continuous pressure from the Duke of Savoy and his allies. While almost everything about this game is made up, the Waldensians are not, so click here should you want to find out more. Louis XIV is keen to keep this unrest alive so as to distract his enemies in Northern Italy from interfering in his plans to invade.

Almost a full house on Saturday. Conrad, Paul, Richard, Neil, Nigel, Shaun and Dave came over for another run out for my late seventeenth century armies, this time replacing the Dutch with Savoyards and assorted allied/mercenary regiments.

We were using Paul's own 'Panoply of War' rules which are still 'under development' rather than Warlord's Black Powder/Pike and Shot sets as might normally have been the case.

Conrad, Richard and I were the French. Dave, Shaun, Nigel and Neil were the combined Savoyards, Spanish and 'others'. The main objective was the defeat of the enemy but there were also some physical objectives to gain control of as well, such as the bridge and the monastery. As usual there are lots of photos in more or less the correct order. As I was playing I was engrossed in my bit of the battle and may not have all the detail or sequence off events right for elsewhere.

in the centre but were soon to be bundled back to their own lines. 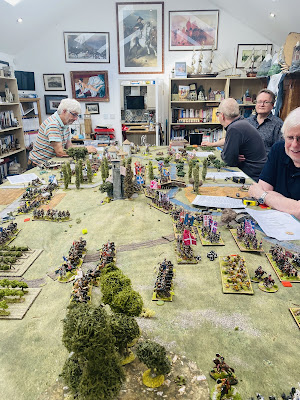 We played until about 3.30 when it was clear the French had won. They'd destroyed two brigades of Savoyard horse, which was all they had, and held two of the three physical objectives. It was an other tremendously fun and spectacular game. Most of the players were new to Paul's rules but we still managed a result. Man of the Match has to go to the French Maison du Roi commander (but I'm biased) and poor Dave in command of the Savoyard horse, in his first game for months, gets the special award for stoicism after watching 12 regiments of horse and two of dragoons depart the game. The rules and maybe how I'd applied the troop characteristics might need a little tweaking but it was an excellent game so thanks to Paul for the unending task of herding cats (literally) and keeping us old blokes straight as far as the rules were concerned.

Not sure when my next game will be; depends upon how my wife's operation goes on Thursday.