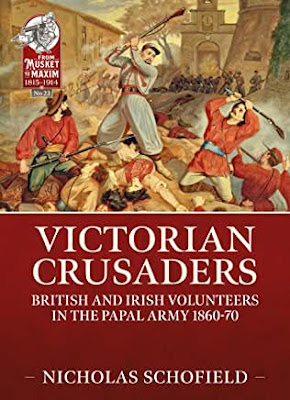 I’m absolutely certain this book will satisfy a wide range range and levels of interest, be it the military historian, the wargamer or the downright romantic. The idea of dropping everything and rushing off to Italy to fight with your co-religionists to defend the Pope is a very but not exclusively Victorian one, as plenty of similar examples can be found in the present century alone.
Romanticism aside, this book ‘Victorian Crusaders. British and Irish Volunteers in the Papal Army 1860-70 by Nicholas Schofield covers the volunteers’ involvement in fighting to defend the independence of the Papal States against the powers behind the Risorgimento, Garibaldi’s Redshirts and the Piedmontese. It is a thoughtful study of who these men were, their backgrounds and reasons for joining Rome’s surely doomed struggle. Fascinating stuff.

The book also covers the key battles of Castelfidardo and Mentana, as well as examining each of the campaigns, not forgetting the religious and political angles which weighed heavily on the reunification process. The author examines in detail the raising and campaigns of two key units in the Papal army, the Battalion of St Patrick and the famous Pontifical Zouaves. The author also describes the wider Papal army in terms of its reform and internationalisation.

Of course, the book is well provided for in terms of maps, orders of battle (for Castelfidardo and Mentana) and it is copiously illustrated with over 50 largely contemporary colour and black and white images. I was quite taken by the list of known English and Welsh Pontifical Zouaves but alas there is no sign of any long lost relatives! Even the incredibly wide ranging bibliography makes for fascinating reading, including as it does a wide range of contemporary archive material.

Overall this book well written and illustrated, and covers a fascinating subject in great depth. This is the author’s first book on military history and he has done an excellent job so I look forward to more from him in the future.
Wargaming the Risorgimento has always been a road I have managed (somehow) to avoid to date, with the exception of some Piedmontese for 1859 and 1866. You never know……