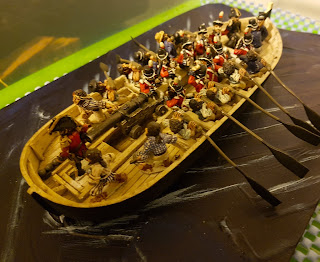 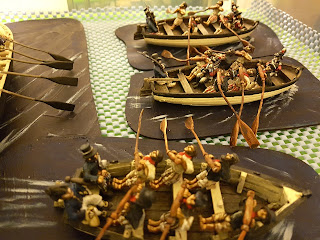 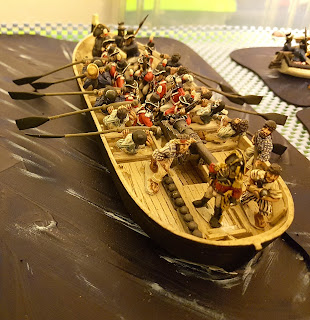 I picked these up off eBay months ago. Several of the oarsmen need adjusting as they appear to be 'catching a crab'! I think they are old Britannia Miniatures figures and boats. The big gunboat is rather wonderful I think. Accompanying the above were around 40 sailors (gun crews, ships crews and shore party) and another 30 or so Marines that I plan to use to crew my other Revolutionary War/Napoleonic vessels once I have finished them. The uniforms for the Marines is a year or too late for my 'period' but they would do nicely for Egypt or maybe even North America in the War of 1812.......Mmmmm? No! I have the hull of another of the gunboats that is slightly damaged but should be easy enough to patch up to add to the 'fleet', which is now getting rather large and just what I need for several ongoing projects and games I have in the pipeline.
By Colin Ashton - January 15, 2018