John the Red came over yesterday evening for a game. I had decided that I had more than enough troops to put on a Sikh Wars game as I had put together some characteristics and stats for the troops of both armies and I wanted to see if they were going to work. We used Black Powder II this time, but I’ve got an idea I might try and adapt General d’Armee. We shall see.

I took the Sikhs and deployed my army with cavalry on each wing, and the infantry and artillery interspersed with each other in the centre. John deployed one brigade of infantry on his right, supported by a brigade of cavalry, while his three infantry brigades and two batteries of Bengal Foot Artillery formed up in the centre. His other cavalry brigade held the right supported by two troops of Bengal Horse Artillery. 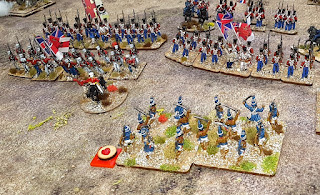 We ended the game there as it was clear that the British had won on both flanks but would probably struggle to take on the centre unless they were able to rollout up from both flanks. That seemed unlikely so I declared the game a draw overall. I reckoned I'd get most of my artillery away covered by ten Sikh regular battalions, one or two of which might have been sacrificed.

Well, it was certainly a colourful spectacle and probably a fair result. The Sikhs were hampered by having a bunch of poor generals commanding them so rarely got moving very much, with the exception of the Akali and Fauj-i-Khas brigade. The superiority in Sikh artillery was never tested as the British wisely stayed out of close or even effective range, and even then they were taking hits and disordering ones to boot! The inferiority of the Sikh cavalry when facing regular European cavalry was accurately reflected in the game. I probably made the Akali too effective, since rectified. The elite Sikh Fauj-i-Khas infantry held their own and actually stopped the British brigade facing them (on the Sikh left). We never really got to test a European battalion's reported superiority properly but the BNI were definitely brittle to say the least! The one European battalion that did get into hand to hand did so against a battalion of Sikh 'pretend' Ghurkas so it was more of an even match to start with at least.

More testing is required, and in the meantime I shall get on with a load of Sikh Feudal irregular infantry and some more British limbers.