This regiment of irregular cavalry is better known as Skinner’s Horse. (Potted History Here). These are Old Glory figures from their Sikh Wars range, and what I like about them is that they’re dressed rather more ‘irregularly’ than most other Bengal Irregular Cavalry figures from the same era, i.e. they are wearing steel Persian-style helmets,  and carry a mixture of swords and shields, lances and matchlocks. They would do for earlier conflicts as well, such as the Pindari Wars or the conquest of Sind or Gwalior. Very dashing they look too. I hope my paint job does them justice, but I hate yellow! The ridderless horse is for the European officer that I'm waiting for as the one that came in the bag isn't dressed right for the Sikh Wars. 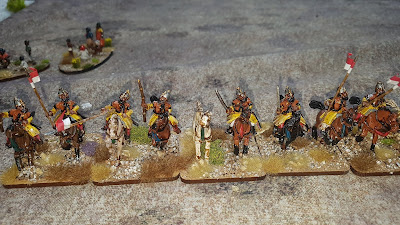 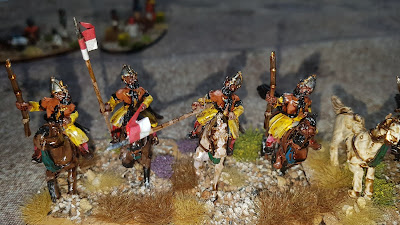 Next we have three vignettes I collected off Nic from Eureka at Salute in 2017. We have a snake charmer, a guy performing the Indian rope trick and a fakir taking a nap on a bed of nails, each with a small crowdof onlookers. I’m kind of pleased with the way they’ve turned out and they're  excellent additions to my collection of random battlefield vignettes. 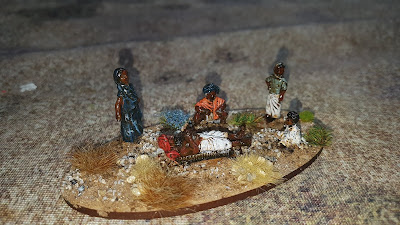 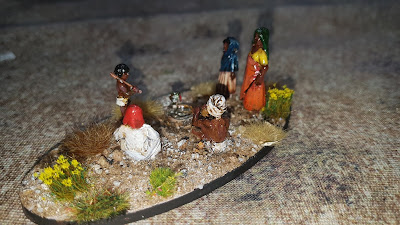 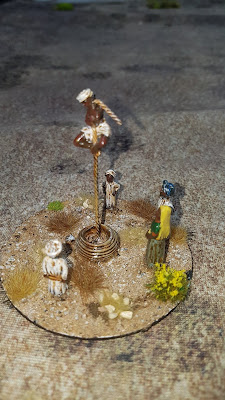