The Battle of Champagne Farm. A 42mm Franco-Prussian game.

John the Red came over last night for a game. For a change, and to give their first outing under their new management I set up a Franco-Prussian War game using my 42mm collection. I bought these off Graham Cummings who was selling them on behalf of the widow of one of his long-time wargaming friends.

The scenario was simple. Both sides needed to gain control of the three bridges across the river, the French to safeguard their flank and the Prussians to threaten said flank of the main French army.  The bridge on the extreme Prussian right was a wooden one in a state of disrepair. On reaching the bridge whoever did so would have to throw a dice to see if it was ok to use, in need of several turns' repair work or totally dilapidated and unusable. The French had two brigades of infantry (11 btns) a brigade of cavalry (3 rgts) supported by two cannon and a mitrailleuse. The Prussians had two brigades of Prussian infantry (9 btns), a brigade of cavalry (3 regts) supported by 4 guns. and a brigade of Bavarians (5 btns) with a gun and two regts of cavalry attached.

We used suitably modified Black Powder 2 to try and reflect the period in terms of weapon effectiveness and tactics.

John took the French and I had the Germanic hoards. As usual I will let the dodgy photos taken during the game tell the story of how the battle panned out. 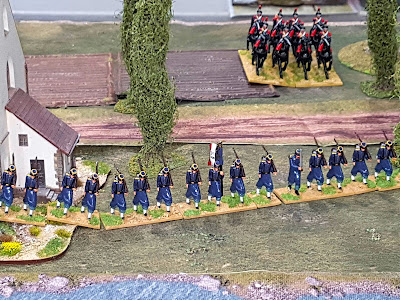 So that was it. A French victory no less. Had I been less cavalier in the use of my artillery I wouldn't have thrown away my sole advantage over the French. I really should have known better. Nevertheless the game was played 'in period' so my Prussian bull-headedness ensured my attack in the centre was shot to pieces. The timid Bavarians did well against the best of the French army and my cavalry covered themselves in glory by retreating in the face of long range Chassepot fire.

What a great little game played in good spirit and to the period and not to the rules. BP2 (with my amendments) worked really well and I look forward to getting these figures on the table again. Maybe the Austrians next time? I may even paint up some more from the big box of unpainted figures I also received as part of the purchase.