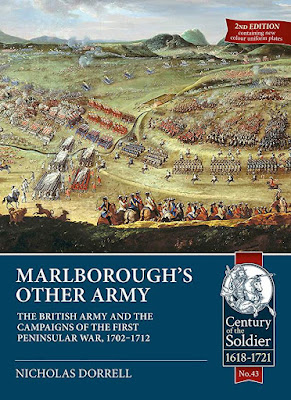 Helion's Century of the Soldier has come up trumps again with the publication of an updated 2nd edition of Nick Dorrell's original work published in 2015.

This as I said is an updated edition of the book first published in 2015 which, incidentally, I've not read. The campaigns in Spain and Portugal during the War of the Spanish Succession are a much overlooked and neglected part of the war. From a British perspective a far larger proportion of the troops were from Great Britain than were to be found in Marlborough's army in Flanders. The commanders too were mostly, but not exclusively, 'British'. For example, the Duke of Galway, commanding the British and Allies was a French Huguenot, while the Duke of Berwick, commanding the French, was an English Catholic. Interesting times, and of course, this was also in part a civil war as there were Spanish armies fighting on both sides.

This book is a gem. As well as covering the course of the war comprehensively, with chapters covering each of the main campaigns and battles, there are detailed chapters of the uniforms, armaments and organisation of armies from the various nations that fought alongside the British in support of the Hapsberg claimant to the throne of Spain. Thus we have chapters on not only the British forces, but on the Dutch, Palatine, Austrian and Imperial armies as well as the Caroleon Spanish army of Charles. The latter is of special interest as it contains information I've not come across before. Finally there is a fantastic chapter on the Portuguese army. Of course, as one now expects from Helion, the book contains eight glorious colour plates covering the uniforms of all the protagonists, by the hand of the talented Mark Allen. The book is copiously illustrated throughout with contemporary black and white pictures and fifteen maps depicting the areas of operation and the battles. There are also a number of very useful orders of battle and unit strength returns. A well written and researched book which is a must for the book shelves of anyone interested in this forgotten campaign.
By Colin Ashton - June 28, 2019