Armies of Phillip IV of Spain from Helion 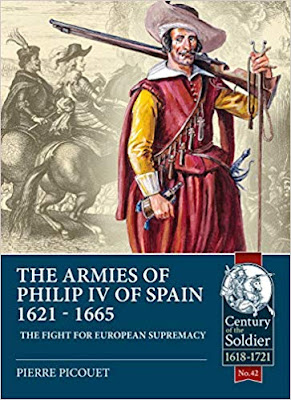 Helion, and especially the ‘Century of the Soldier’ series, only get better. This quite hefty volume is jam packed full of a vast amount of detailed information relating to the armies of Philip IV of Spain through a tumultuous period of European (and wider afield) warfare. In addition to informative
chapters on every aspect of the Spanish army including armaments, clothing and equipment, organisation and recruitment and tactics to name but a few, the book also covers every campaign undertaken during the period covered. Spain was fighting a long series of wars on multiple fronts against tenacious enemies, from Flanders and Germany to Italy and the Iberian peninsular, in addition to her overseas possessions, and this took its toll in terms of men, money and resources. There are numerous contemporary black and white illustrations, 15 useful maps and eight pages of colour plates detailing soldiers’ dress and standards carried by the army. There are some useful appendices covering muster roles and commanders. The book is well written and judging by the bibliography very well researched. Anyone interested in Spanish military history and the army of this period really must buy this book, as must others with even just a passing interest in the era. You will not be disappointed. Well, I hope not. I like it.
By Colin Ashton - June 23, 2019