All at Sea from Helion


The latest from Helion and Co’s From Reason to Revolution series is this fascinating and often overlooked aspect of the American Revolutionary War, entitled ‘All at Sea’ by John Dillon. 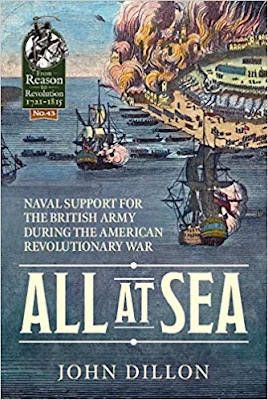 The third of my recent Helion offerings (part of their Reason to Revolution series) is this account of an important and complex but often overlooked subject relating to the American Revolutionary War is the provision of naval support for land forces engaged in operations at the end of a long and hazardous lines of communication and supply, in this case across 3000 miles of the North Atlantic!  The big issue facing His Majesty's Government at the outbreak of hostilities was how to supply and reinforce the pitifully small regular forces in America while also safeguarding Britain's own trade and other global interests. The army in North America was to expand to 90000 men during the course of the war, a war waged among what was now largely hostile or ambivalent civil population. The book presents a scholarly analysis of how these problems were overcome (or not) and is packed full of facts and figures that demonstrate the shear scale of the supply requirements. The text is complemented  by numerous contemporary quotes or accounts of the progress of the war within the context of the Navy's role in sustaining the army in its fight against the rebellious Colonists while waging its own war at sea against privateers and then the French. We all know how the war ended but without the considerable contribution of the Navy it is very clear from the evidence presented by the author that the war would have been lost much sooner. The book is well written, well referenced and includes a comprehensive bibliography of primary and secondary sources. It is also illustrated with several useful maps. I enjoyed it and can recommend this book to anyone interested in the American Revolution and the role of the Royal Navy. In fact anyone wishing to factor in as part of a campaign the supply of troops overseas in the Black Powder era would also find this book of interest.
By Colin Ashton - December 22, 2019