Yet more goodies from Helion

I thought Christmas had come early last Saturday as three books dropped on the doormat courtesy of my friends at Helion & Co. Here are my thoughts on the first. 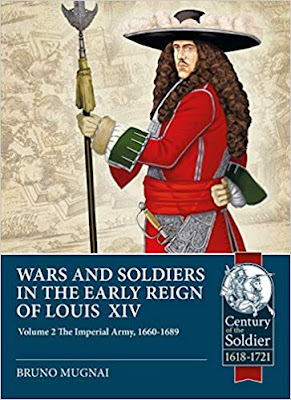 Well Helion have done it again. This is the latest book in their 'Century of the Soldier' series and quite probably the author Bruno Mugnai's best to date. The Wars and Soldiers of the Early Reign of Louis XIV Volume 2 focuses on the Imperial army between 1657-87. It is a fascinating and informative read.

After setting the scene with a chronology of the seemingly endless list of wars, uprisings and sieges (43 in total that took place during the period under review, many of which I'd never heard of), the book then includes a further scene-setting chapter with an informative discussion on the House of Austria before launching into the administration and organisation of each element of the Imperial army (i.e. the high command, infantry, cavalry and artillery), as well as that of the Royal Hungarian Army and the Reichsarmee, which is dome in great detail. The next section of the book covers the Imperial army on campaign, from Poland and the Baltic between 1657-60, the Ottoman War of 1663-64, the many uprisings within the Empire between 1671-81, the War against the French along the Rhine and in the Spanish Netherlands from 1671-78 and the years leading up to the siege of Vienna in 1683. While entire books could and no doubt have been written on each of these campaigns the author provides more than enough information for both the casual and serious reader to garner a pretty good understanding of events as well as the 'whys' and 'wherefores' of each campaign. The section on the Ottoman War is particularly useful to someone, like me, with limited knowledge of this subject.

Finally (almost) we get a very useful section on the evolution of uniforms and standards of the army. This section is supported by sixteen gorgeous colour plates, depicting uniforms and flags from this period, all drawn by the author, with explanations of each at the back of the book. There is also a vast array of interesting contemporary black and white illustrations.

Completing this excellent volume are several appendices which include several highly useful orders of battle, the contributions (in men or money) of the various states to the Reichsarmee, and a list of Imperial regiments including uniform details where known. Overall this book is a gem. Well written and referenced, and judging by the select bibliography painstakingly researched. This is an absolute must for anyone interested in this era and the Imperial army whatever the reason.

Volume 3 of this series will cover the Ottoman Army, which I expect will be an absolute treat!