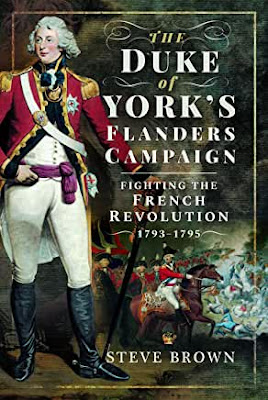 First thing to say, I got these for Christmas following very heavy hints to wife and daughter and emailing them links to the appropriate web store. I’ve done no more than skim through them so far but both look excellent. As an enthusiast of the French Revolutionary Wars (in a wargaming rather than necessarily a political one) Carol Divall’s book on the experiences in said wars of General Sir Ralph Abercrombie is right up my street, as he was a prominent figure in both the Flanders Campaign 1792-95 and the Helder campaign in Holland in 1799. I don’t game the Irish Rebellion (but I might) nor the Egyptian Campaign in 1801 (I doubt I ever will) where he met his end but I am as readers will know heavily into gaming Flanders and the Helder. The Duke of Yorks’s campaign in Flanders appears excellent. Maps. Orders of Battle. Readable and informative text. What more is there to like? when I have finished devouring them I will give my opinion.
By Colin Ashton - December 26, 2019