Its ages since we had a Seven Years War game so yesterday I staged my at least annual Leuthen refight, the anniversary of the battle being 5 December 1757. Conrad and Shaun played the Austrians while Dave J and I were the Prussians. By tradition Dave was Frederick. Paul S umpired as we were using his own Panoply of War rules rather than Black Powder or Honours of War. I had sorted out the orders of battle and troop characteristics. Essentially all the Prussians except the fusilier battalions were rated very highly, even the heavy and light cavalry, which may or may not have been too generous but this was the Prussian army arguably at its peak before losses wore its quality down. The Austrian Cuirassier  were also rated highly, while the Dragoons amd Infantry were classed as well trained experienced troops. Their Hussars and the Reichsarmee contingent were rated poor, the former as they were not ‘battle cavalry’ unlike their Prussian counterparts who definitely were. Units were scaled down from the original orders of battle at the rate of one cavalry regiment (24 or 30) on the table for every ten actual squadrons  and one battalion on the table for roughly every three or four actual battalions. Not all the Austrians featuring in the OoB were available; many had already been engaged and destroyed and others were still facing the original Prussian position or were en route to the battle an too late or knackered to join in.

Anyway, it all kicked off nicely on time and we set to it! In time honoured fashion the photos will show how the battle unfolded, except for a period towards the end when I was too absorbed in the game and forgot to take any. 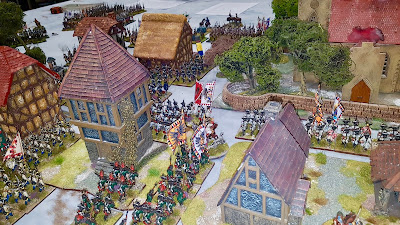 Above and below, the village of Leuthen, packed full of Austrians and demoralised Reichsarmée infantry, and the church ablaze uncontrollably, forcing both sides to vacate the churchyard. 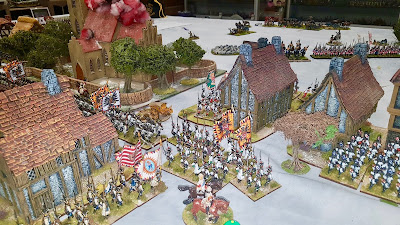 All in all a tiring yet exciting game and a close-fought Prussian victory. The Austrians did well but their troops were outclassed by the Prussians. I'm less inclined now to think that I'd over rated the latter as the Austrians were in reality exhausted after their rapid march of several miles in some cases, passing their fleeing comrades, to reposition their line to face the outflanking Prussian army. I'm certainly warming to Paul's rules and I am keen to try them out again in another SYW game (I am almost ready with enough French for Rossbach), or maybe a French Revolution one. We shall see. Very many thanks to the chaps for coming down to take part in another trademark Big Burrow Game. I've yet another game here next Saturday, but it is a secret between me and the scenario organiser. You will have to wait.