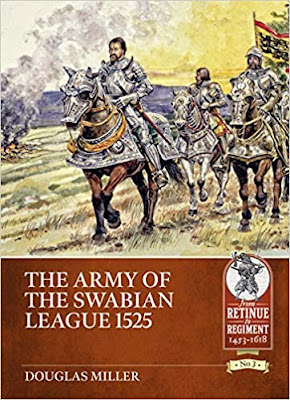 Christmas came early in our house this year when last week I was very fortunate to receive this and two other books from my friends at Helion. I've already put up a post about one, The Army of the Empire during the early reign of Louis XIV, so here is another. The latest in Helion's new 'Retinue to Regiment' series is this excellent book by well known military author Doug Miller. As with all Helion's series this one just goes from strength to strength with each publication. It follows the format one has come to expect from Helion and presents an excellent, informative and detailed (insofar as it possible within the constraints of the size of the book) description of the background to the formation of the League, the organisation of the League army, it's campaigns against Duke Ulrich of Wurtemberg and the Peasants, and is completed by four very useful appendices. The chapters covering the organisation of the army cover everything from the usual command, horse, foot and ordnance but also the Train and Communications. Indeed the latter section (my favourite and a real eye opener) argues that the League's superiority was due in no small part to intelligence gathering, propaganda and communications, using an effective system of couriers and despatch riders. Technological issues aside, the activities described could be easily attributed to the 21stC rather than the 16thC.  The information on the campaigns of the League is well presented and detailed. The whole book is well-supported by nine very useful maps, 39 mostly contemporary black and white illustrations or diagrams and eight pages of glorious colour illustrations of troops and banners. In short, an excellent well researched and well written book, and one I can highly recommend. Of course I have no plans whatsoever to buy any Landsknechts, well any MORE that is. What would I do with them.......?
By Colin Ashton - December 22, 2019