Lion of the North. The Swedish Army during the Thirty Years War Vol 1 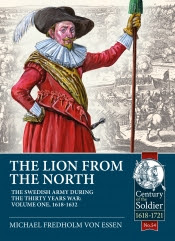 One of the latest publications in Helion’s Century of the Soldier series, is The Lion from the North - The Swedish Army During the Thirty Years War Vol 1, 1618-1632, by regular Helion author Michael Fredholm Von Essen. As one might reasonably expect from Helion, this is yet another excellent and at 272 pages quite substantial offering.

I know a bit about the subject but am no expert, so found the book a valuable and highly informative addition to my library. For me the narrative covering Gustavus’ campaigns against Denmark and in the east is one of the highlights of the book, with lots of information just crying out to be used as the basis for a wargame  or a campaign. Indeed, the author argues that the Swedish experience of war against the Poles and Muscovites helped shape it into the army we know at the start of its involvement in the ‘German War.’The narrative that makes up chapter 1 takes us up to the death of Gustavus and the end of the battle of Lutzen. The rest of the book gives us a detailed description and analysis of just about every aspect of the Swedish army, such as raising the troops through Oxenstierna’s reforms, weapons, uniforms, organisation, tactics, the all important logistic problems of feeding and supplying the army, and even a section on how ‘intelligence’ was used to effectively support operations. Many of these topics have been covered in other books, but are nonetheless a thoroughly refreshing and in depth review of the army and the major reforms it underwent under Gustavus.

The book is rounded off with three useful appendices covering the marching order of the army, the order of battle at Lutzen and information on selected enlisted regiments of the army, with notes on their status at the close of the period under discussion. No Helion book in this series would be complete without some useful looking maps, a large number of black and white illustrations (many contemporary) and a whopping 32 colour plates of uniforms and flags!

Overall then, a great and enjoyable read, full of detail, and is well referenced and researched if the extent of the bibliography is anything to go by. Highly recommended, so if the Swedish army of Gustavus Adolphus is of interest, this is one to get. Roll on Volume 2.