A Quiet Couple of Weeks

Well,  not much happened last week, and the same can be said for this week, so far at least. No game last weekend as I’ve been out of sorts with my arthritic back. As it turns out we have a localised lockdown N of us in Durham, Sunderland and Tyneside so most of my volunteer figure movers aren’t allowed out. I'm sure it'll get worse before it gets better but to be honest I'm quite content with the impact of 'the Great Confinement' on my life. We lost some holidays but have been refunded in full and we still can't go swimming but we both have plenty of stuff to keep us occupied and sane. Just chilling and painting at a careful leisurely pace.

Nice weather though last week and a bit of this so I was in the garden sticking a bunch of MDF Italian buildings together, a mix of Sarissa and TTC (the Streets of Venice range off the latter are great, attractive, easy to put together and cheap). I'm working towards building a walled Italian town to put in one corner of the table. Most of the walls and towers are constructed but everything needs painting. I’ll show them when they’re done. They're all very nice but my Hovels Mediterranean house are much smaller. It'll work though.

I’ve finally managed to get my Florentine ‘soccer’ team completed, albeit a bit hurriedly. 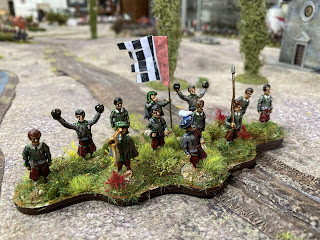 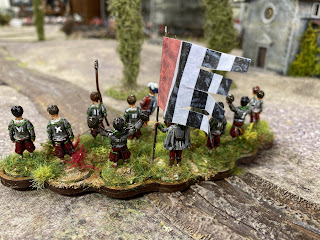 Before anyone asks, the guy with the spear is the goalkeeper and the two with swords are defenders. With all those sharp pointy things in the game, plenty of new balls are required, hence the chaps waving several spares in the air. The figures are from Mirliton in Italy.

Below is a unit of Italian militia heavy infantry with polearms and shields. I used water slide decals for the shields which were very fiddly but worth it I think. These are Perry Miniatures. 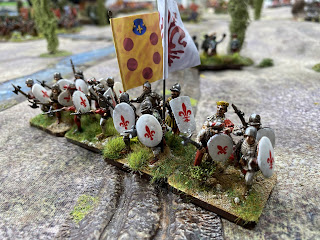 I’ve also completed another three units totalling 18 Gendarmes I had lying around; one Neapolitan (Foundry), one Florentine Condottieri (Foundry) and the other French (Steel Fist). I’m toying with the idea of doubling up the figures in a unit of gendarmes from six to 12.  Maybe I will, maybe not but they were there to paint. 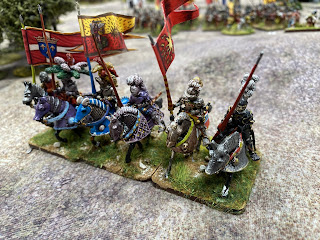 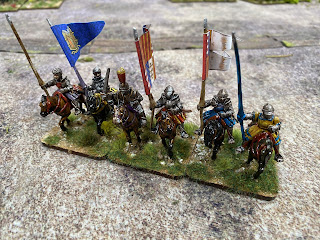 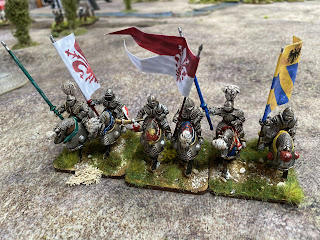 I have another Italian Wars game planned for Saturday. Not sure of the scenario yet.