Saturday was a busy wargaming day. First of all I hosted a virtual Italian Wars game. The new lockdown rules meant that I couldn’t have anybody round to help move the troops (we could’ve all gone round to the pub but I can’t have one person in the house! Bonkers logic Boris! Katherine very kindly offered to help move troops but she actually spent the time monitoring the technology, and enjoying and laughing at the banter and occasional hysteria of the players. Richard, John and Neil were the French and Conrad, Paul and Nigel the allied Spanish, Papal and Florentine army, hereafter referred to as the League. The Venetians from last week would’ve tipped the balance too far against the French so they were deemed to have got peeved over something and taken their ball home.

The aim of the game was for the League to attack and capture the French camp. In doing so they’d release the kidnapped Florentine soccer team ( see here) netted by the French on their way to a tough away fixture in Milan. Obviously the League had to defeat the numerically inferior but (largely) qualitatively superior French. The  League were also induced to attack vigorously as for each BUA they captured they’d receive 1D3 back in lost stamina points to use as they saw fit. (What I didn’t say was that if they then subsequently lost a BUA they’d loose the extra stamina points. Tee hee). The French were disadvantaged by having -2 on their leadership levels in turn one and -1 in turn 2. We were using Pike and Shotte, which are not the best but are the easiest to handle remotely. I have a very few house rules, e.g. I give crossbows closing fire and mounted crossbows and arquebusiers’ range is reduced to 12”.  The troop characteristics are also different to the rule book, and are based on some produced and kindly given to me by James Roach (Olicanalad) with a few changes of my own. 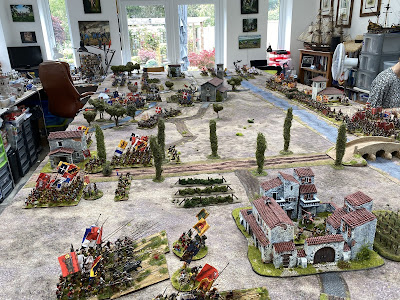 So here we go, with the photos hopefully supporting the narrative. They should be in the correct order but sometimes they rearrange themselves when uploading to the blog.

On the French left, the two units of Argoulettes were outnumbered by swarms of Spanish Ginettes and some Italian mounted crossbowmen. Behind that lot were some Florentine Condotta cavalry and militia crossbows and heavy infantry.


Sadly at this point mid afternoon the internet finally won so we agreed to pause the game and restart it on Friday. It's still very much in the balance. The League left was unwilling (probably wisely) to move against the Swiss, but  the Swiss were coming to them instead. In the centre the Spanish were across the river,  and the three large blocks of Papal pikes were rooted to the ground. The abbey was under attack by several Spanish Colonas but the French defenders were holding, although their supporting units had taken a battering, and two had broken. The French gendarmes had begun to trundle forward to plug the gap. On the French left their light cavalry were hanging on providing support for more gendarmes, while the Landsneckts were in danger of being shot to pieces of the Italian crossbow men and artillery could bring all their weapons to bear, and there was also the danger of Spanish and Neapolitan gendarmes at the Landsnecht’s ‘three o’clock’. As we left the game the Landsnecht two-handed swordsmen were about to charge the guns and the French Gendarmes were trying to charge and break through the Genitors to get at the Italian gendarmes.

A good game so far, visually pretty damned good imho, and not too bad from my perspective in moving the troops and offering equal amounts of advice to both sides while my wife manned NORAD to keep things running when t’internet got dodgy. Thanks to all the players and the missus and I’m looking forward to resuming in a few days time with those who are able to join in.

Then at 4.30 uk time I joined the Virtual Wargames Group for a global chat about wargaming in general with some great 'show and tell' photos as well as a presentation from one of the members. A great way to finish the day.