‘Rebellious Scots to Crush’ from Helion 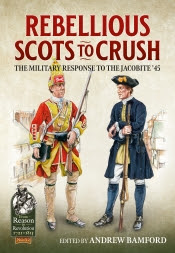 I fear I might be starting to sound like a stuck record player (younger readers can google what a record player I s) but Helion have done it again. “Rebellious Scots to Crush, the military response to the Jacobite ‘45” is the latest in their ‘From Reason to Revolution’ series’. This book is a collection of fascinating and informative essays by a number of well known authors on the Jacobite risings, covering many different aspects of the Government’s response to the uprising. Each of the contributors’ chapters are worthy pieces of research in their own right, so having them all brought together under the same cover is a real bonus. The various chapters contain detailed examinations of the regular regiments of foot and dragoons, how and where they were employed and how well (or badly) they performed during the campaign. A similar approach is taken to the ‘noblemen’s regiments’, the pro-Hanoverian Scots militia raised to fight the Jacobites, and the English volunteer regiments raised in response to the Jacobite invasion of England. In tackling the subject this way this book offers something different to the normal worthy narratives we may have read about the ‘45 campaign. I particularly liked the section on the ‘noblemen’s regiments’ as this was a subject about which I knew nothing. The overarching focus throughout is very much on the men and the regiments they belonged to and offers an insight into why, for example, the conduct of some English regiments was not up to expectations.

The book is well illustrated, with several colour plates including, as one has come to expect from Helion, some showing representations of the uniforms worn. As well as a range of handy maps you also get a large amount of fascinating data contained within a range of useful charts and tables, for example previous employment of the men, their wounds, ages and so forth. The organisation of the regiments well as a good number of orders of battle for the different stages of the campaign, a list of colonels and an index of regiments round off an excellent publication.
This book is well written and the editor has done a grand job in pulling it all together. In short, for me this is an excellent publication, with a whole raft of new information and insights into the campaign. For anyone interested in the ‘45 Rebellion this is a volume that really should find a place in your book case.
By Colin Ashton - September 09, 2020