New from Helion: The Commotion Time. Tudor Rebellion in the West, 1549 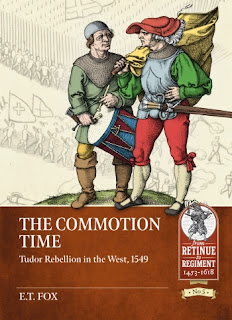 I knew nothing at all about this rebellion in the West Country other than vague memories of reference to the Prayer Book Rebellion (I think) in my ‘O’ Level History course, so was intrigued by this recently published book by Helion in their relatively new series “From Retinue to Regiment, 1453-1618”.

The Commotion Time, The Tudor Rebellion in West, 1549 by Dr E.T. Fox is yet another title covering a very niche and specialised area of military history, something that continues to be Helion’s primary focus. The causes of the civil unrest and in some cases armed rebellion during the early years of the Tudor dynasty (this one in the reign of young King Edward VI) are but a vague memory but this book pricked my interest as its primary concern is the military campaign in the West Country. The book describes how the rebellion was fermented and grew until thousands of commoners in Devon and Cornwall took up arms against the King. It is a fascinating and engaging read, full of detail, limited only by the space allowed by the publishers. The standard Helion format is followed, taking the reader through a whistle stop tour of the region in 1549 before embarking on chapters covering the men, arms and accoutrements of the armies of both sides. I knew foreign mercenaries were often employed by the English Crown so wasn’t surprised to learn of the Germans and Italians hired to supplement the Royal Army, but the presence of Albanian Stradiot light cavalry was something I’d not expected.

This rebellion featured five large pitched battles in addition to the siege of Exeter, and these are all covered in detail, each accompanied by some useful maps of the battlefield and troop movements. Throughout, the book is well illustrated, with both contemporary illustrations and present-day photographs. The only thing missing are the colour plates normally found in Helion publications showing a range of troops and the banners they fought under, but that is an insignificant issue overall. The book is rounded off with a number of interesting and useful appendices and an impressive bibliography of primary and secondary sources.

Overall then, this is a must for anyone with an interest in this episode in English history, or in a broader sense the military history of 16th century Europe. I enjoyed the read and can highly recommend it.
By Colin Ashton - September 04, 2020