This week’s game was the first tabletop outing for my lockdown project, the Italian Wars. I used modified  Pike and Shotte rules (with most of the stats and some of the house rules kindly shared by James Roach) and the break tests from Hail Caesar (so a 6 didn’t cause disorder but did cause a break test using the HC results).

The game was a simple scenario whereby the French had to attack the combined Spanish/Papal/Venetian alliance, the League of Lambrate Ghisa, and capture control of the road, the village and the bridge. I showed some restraint in not using all of my collection, only about 95% of it. Capturing the camp would give the French an immediate victory as it contained not only the war chest but also certain famous personages from the telly.

As is now 'normal', the game was played remotely using Skype and YouTube, with a couple of players actually present to help me move the troops around, because as one might imagine doing it for both sides myself is knackering, and provide the eyes and ears on the ground for their respective sides. Also, it is a bit of company and the chance for a proper chat. Neil, aided by Richard were French, while Paul and Nigel, assisted by Conrad were their opponents.

I would (in time honoured fashion) have let the photos tell the story, but I seem to have misfiled some taken by Richard and the ones I do have have deliberately put themselves in a totally random order which I may not have fully rectified. 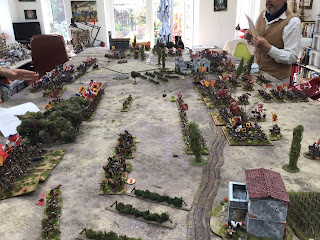 The battlefield, French to the left. Their opponents have Papal troops on the left, Spanish in the centre and Venetians on the right. 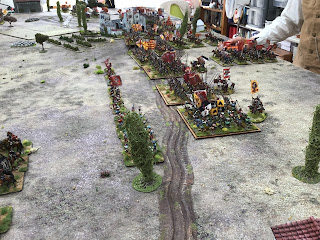 The Papal contingent holding the Italian left. On the extreme left of the line are Landsneckts in the service of the Papacy, paid by Paypal no doubt. 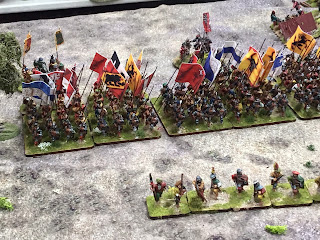 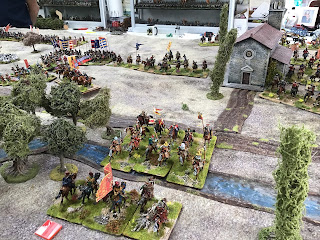 Venetian Stadiots move towards the enemy. 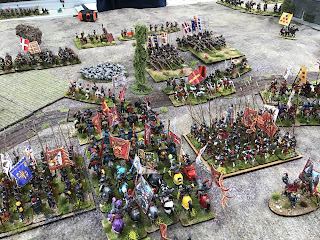 The Venetians advanced slowly towards the French centre. 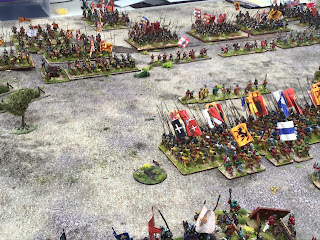 Seen from the other side, the Swiss advanced very un-Swisslike ie slowly. 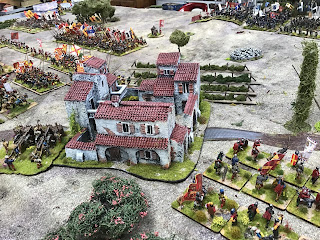 The town of Villa Limoncellos, put together from a load of Hovels Mediterranean-type buildings. 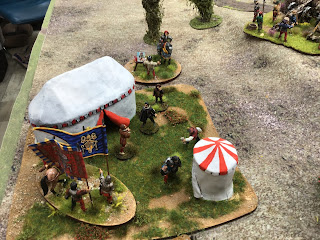 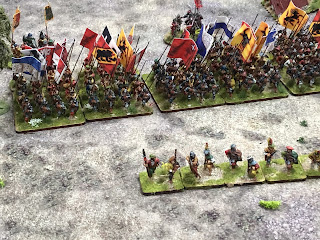 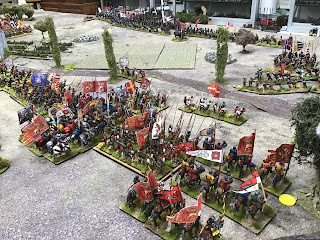 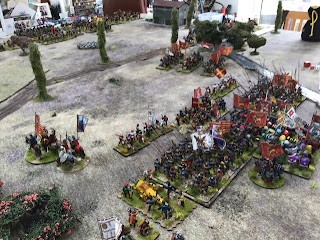 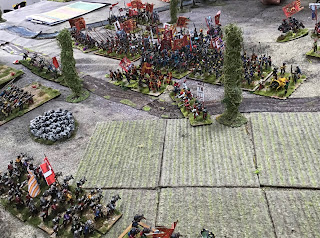 French crossbows at the bottom of the picture ranging in on the Venetians. 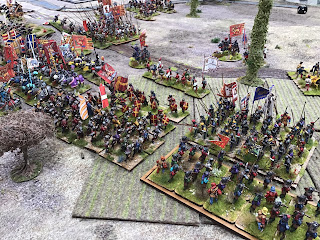 Eventually the Venetians charged, with a pike block and a unit of swordsmen hitting two units of French crossbowmen. 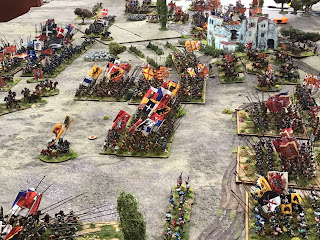 While in the centre a Spanish colonella catches a huge unit of Swiss. 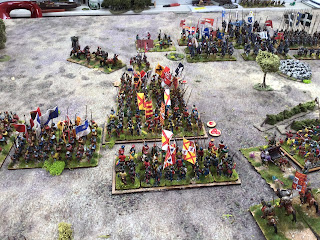 The well supported Spanish slugging it out with the Swiss and holding, for a while at least! 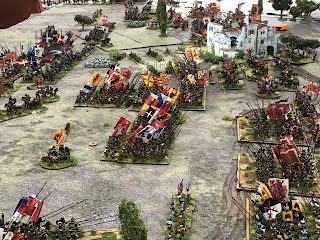 The Swiss are getting closer to the Papal line. 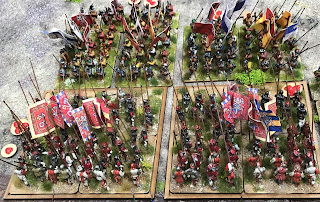 Two further Swiss units and the Papal pike blocks hit each other in a brutal fight. 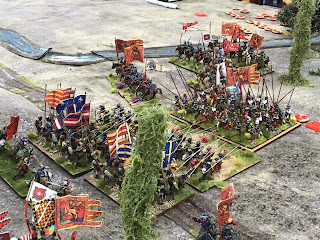 Over on the other flank the French Landsnechts charged the Venetians. 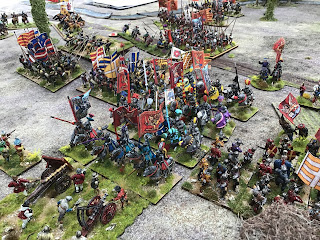 Meanwhile the Venetian gendarmes charged and overran a pair of French light guns. It was a bit like wiping a fly off your car windscreen. 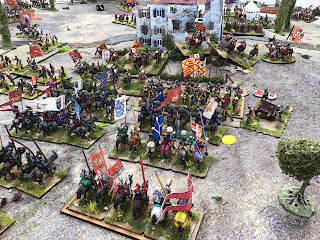 Neil launched his French super-dooper Gendarmes at the Spanish skulking in the olive groves. While all this had been going on  the Stradiots had driven off most of the French light cavalry on the flank. 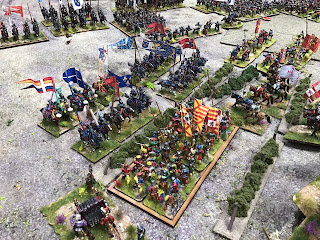 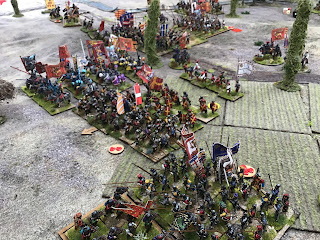 The French crossbowmen were eventually broken but as can be seen here were selling themselves dearly. 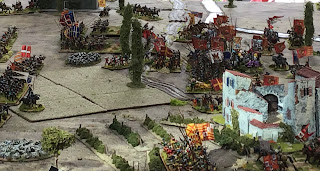 This is where we get out of sync with the photos, but here's a general shot of the battle in the centre. I do like the town. 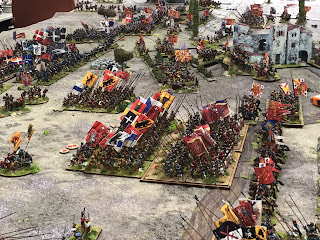 The Swiss and Papal troops on the French right.  The Swiss made heavy going of it but eventually broke both units facing them, having already broken a Spanish one closer to the centre.
Ultimately the French centre was crumbling as their crossbows and French pike struggled to hold the Venetians. The French gendarmes were overpowering the Spanish but it was going to be a slow job and the battle would be decided elsewhere. The French were winning decisively on their right against the Papal troops (thanks to the Swiss) and on their left were taking the ascendency against the Venetians despite their flanks being open to the ravages of Stradiots now their own light cavalry had been destroyed. Ignoring the light cavalry and skirmishers the Italians also had more broken and shaken units than the French.
I decided that as the French had yet to capture their objectives fully the outcome was a 'winning draw' to them. A couple of turns might have clinched it (either way actually) but who knows.....
I have to say that it was a hugely enjoyable game and that I am really very pleased the way the collection looks en masse. Thanks for everyone for taking part and for my wife for ensuring the technology didn't let us down. Maybe 30% of these figures were painted for me or bought painted and tarted up, but I completed the rest and based everything up. This project has been almost my sole painting focus for the entire period of lockdown, and amazingly as I said at the start I didn't put all the troops on the table!
The amended Pike and Shotte rules worked really well, as did the various house rules. I'm sure we forgot a few bits of the rules and maybe even slipped into Black Powder on occasion but it was a fun game, with a few ideas taken away to refine the rules. If anyone is in a truly masochistic mood then you might, if its not been deleted,  find the video of the game here.