New book from Helion. Neither Up Nor Down. 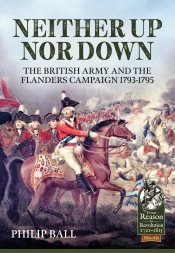 I’m getting spoilt at the minute with the number of books being published that cover topics I’ve a massive interest in. Well, the latest in Helion’s ‘From Reason to Revolution’ series fits firmly into that category. Philip Ball has written a scholarly and richly told account of the British Army and it’s part in the Flanders Campaign of 1793-1795 with his latest offering, ‘Neither Up Nor Down.’ I expected it to be good based upon Phil’s previous book ‘A Waste of Blood and Treasure’ which covered the Anglo-Russian Helder campaign on 1799. I was not to be disappointed.

The British army that left our shores to fight in Flanders during the War of the First Coalition against Revolutionary France has been till now seriously neglected when compared to its later  campaigns in Spain and in the 100 Days Campaign. This was not a well-oiled precision instrument of war by any stretch of the imagination. Most of the army was spread in penny packets throughout Britain’s overseas possessions and the army at home was in a pitiful state. The weak infantry battalions, ie most of them, were brought up to strength with drafts and often unwilling recruits, they were ill disciplined and badly supplied, they struggled with the climate and terrain of Flanders and were at best only adequately led. Some battalions were so bad as to be deemed unfit for active service and were left behind. Despite this the army was to perform well and learn while on campaign and it came out of it better than when it went in, even though the campaign ended disastrously.

The experiences of the British army, operating as part of a multi-national force including Austrians, Prussians, Hanoverians, assorted Hessians, Dutch and Emigres are told warts and all, as the Coalition struggled to contain and defeat the often vast armies of Revolutionary Frenchmen, hampered as the commanders were hampered by often conflicting political considerations. The many battles and sieges are chronicled in great detail and are covered in such a way as to be clearly followed, blow by blow, on the maps or even on the actual ground.

The author uses a wide range of British, French and German sources, as evidenced by the impressive bibliography, and contains many contemporary, honest and sometimes colourful accounts, by officers and men, of incidents in the campaign as it progressed. The author has walked many of the battlefields and researched extensively to produce a well written in depth and authoritative account of the campaign, complete with some excellent maps, lots of black and white illustrations and some excellent orders of battle for both sides at various key stages of the campaign.

To be fair, this is a period in history about which I do know a fair amount,  but I was still chomping at the bit waiting for this book to be published as I was sure it would contain much that I didn’t know and perhaps it would all be presented with a different ‘spin’ rather than a simple re-hash of already known ‘stuff’. Well, the book does all that and more, and I would wholeheartedly recommend Phil’s latest to anyone with even a passing interest in the British army of the French Revolutionary Wars. If you do, then this book deserves a place on your bookshelves.