I launched this campaign way back in the days before lockdown, sometime in February I think. Since then we’ve managed from September 1st to September 20th 1793. It involved ten players and several of my mates scattered around the globe who played the roles of Carnot, Dundas, Baron Thugut of Austria and the King of Prussia. A couple of the players were late comers but that was simply as a result of the way the narrative developed. At the start nobody knew who else was taking part and which character they were playing. All orders were to be sent via email through me so I could ensure they arrived at the right time, or not at all. During those 20 campaign days in September we played nine or maybe ten games on the tabletop and six sieges (With two exceptions these sieges were relatively small affairs as numerous factors contributed to their swift resolution) on the map. The first two battles were played in the old fashioned way of players around the table. The rest were either by email and photos, and then using Skype and ultimately Youtube to run the games remotely. The first game was actually a disguised scenario but resulted in the French capture of Menin. 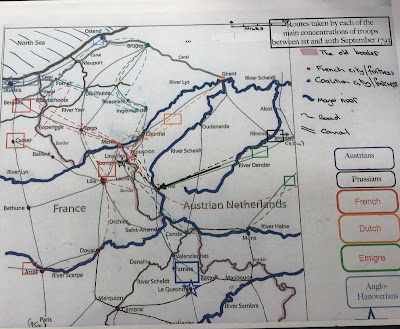 Looking first at the operations of the Anglo-Hanoverians on the coast, the siege of Dunkirk was proceeding slowly as the siege train had yet to arrive.Houchard’s plan  was to use the bulk of his force to smash the Anglo-Hanoverians before turning on the Austrians so three divisions were based around Cassel and Bergues while the other was around Lille. A sensible plan. 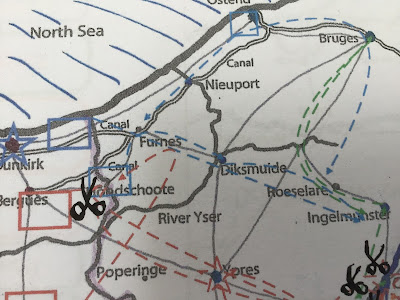 The area around Dunkirk, showing the site of the two-day battle at Hondschoote. Ypres was to fall to the French but the siege of Dunkirk was abandoned.

Spirited sorties from Dunkirk and aggressive patrolling around Bergues kept the English on their toes, while the Hanoverians occupied a line of outposts through the marshes and fields in front of Hondschoote, their main position. On 4 September the French under Jourdan attacked Hondshoote but were driven back with heavy losses. The next day they attacked again, this time supported by Houchard who hit them from behind. The Hanoverians and Heasians were soundly beaten, even the Hanoverian Guards were routed, and the Duke of Cambridge captured for a few hours, and those troops that could withdrew to Dixmude.  On hearing of this defeat the English were fearful of being caught between the French and the sea and withdrew to Furnes. There were already cavalry patrols from General Souham’s division on the road  between the Furnes to Dunkirk canal and the sea that had to pushed back but the English eventually made it back to Furnes.  They then faced off General Souham’s division before the latter slipped away to rejoin Houchard. The Duke of York received a request for help from the Austrians so after several days rest began to march towards Courtrai. They reached Courtrai, just as it had surrendered, so pulled back to Inglemunster, collecting some Austrian hussars and the battered Army of the Conde on the way. 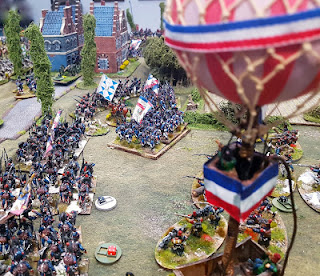 That really ended the campaign in western Flanders but it had been hotting up around Courtrai for several days. A French division under Pichegru had been screening the movements of the main army as they dealt with the English, based on Lille then Menin, and had laid siege to Ypres. The main Austrian army, with the Emigres, had abandoned the siege of Le Quesnoy and headed for Tournai and then Courtrai. A division of troops were deployed on each side of the R. Lys, connected by two pontoon bridges. Most of Pichegru’s command pounced on the Emigres on the left bank of the river and shattered them, taking many prisoners. The Austrians under Kinsky on the opposite bank tried to intervene but were driven back, as was a brigade of Clerfeyt’s Austrians from Courtrai. Both Austrian brigades lost heavily. 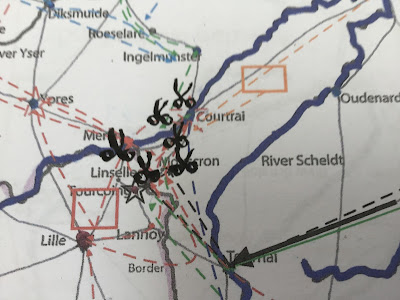 The central area, around Menin and Courtrai, and the scene of many key battles.

Meanwhile Houchard turned to deal with the Austrians while the Anglo- Hanoverians faffed about. Houchard reached Menin on 7th or 8th September and put in place a plan that would ultimately see the end of the Austrians. Aggressive patrolling on the left bank prevented the Coalition from gaining much intelligence while two divisions under Pichegru and Souham attacked Kinsky’s Austrians on the right bank of the Lys. Reinforcements from Courtrai and the Dutch contingent from Ghent commanded by a non-player character, ie a D20, fought their way through the French cavalry who’s instructions had been to prevent the Austrians in Courtrai from reinforcing Kinsky. Both French divisions struck Kinskys command and overran it. They also threw back the reinforcements capturing many prisoners (including Kinsky and two battalions of grenadiers). It was another significant victory for the Armee du Nord. Colberg withdrew all his infantry into Courtrai while most of his cavalry remained at Inglemunster. The shattered Dutch withdrew to Ghent a shattered force. The Emigres continued to withdraw towards the coast in the hope that the English would treat them better than the Austrians. (cont’d after these pictures). 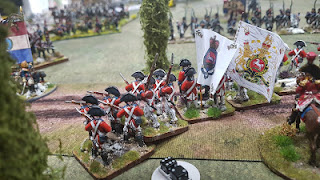 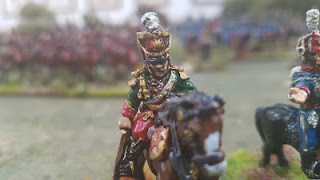 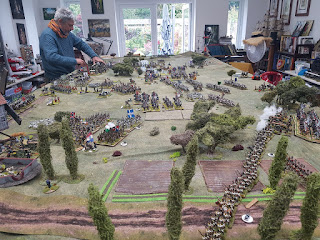 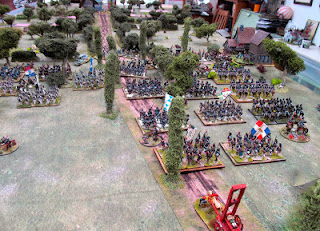 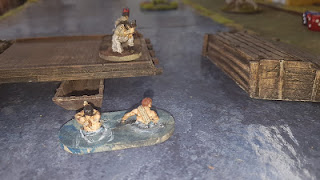 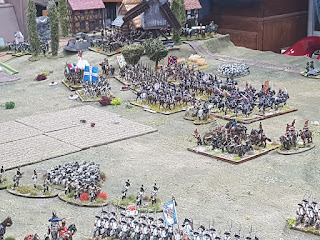 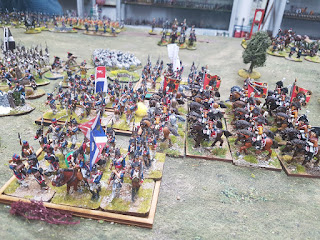 Houchard began a formal siege of Courtrai. Colberg ordered a breakout, but this was stalled with heavy losses and yet more prisoners lost. On 14th September a practicable breach was opened in the wall and the Austrians asked for terms. The entire Austrian army, or what was left of it, marched off under parole, not to fight the French for a period of 12 months. The Austrians had no idea that the Anglo-Hanoverians were less than a day’s march away when the walls were breached.  The Anglo-Hanoverians were conned into withdrawing after being told that the terms of the surrender (which hadn’t yet taken place at this point) would include all troops within five miles of the city laying down their arms. The Anglo-Hanoverians put their honour first and withdrew, following which the Austrians under Coberg agreed to lay down their arms and open the gates.

By the end of just two weeks of campaigning the French had won several victories, and gained control of all except the most northerly crossing point of the R. Lys, thus isolating the Anglo-Hanoverian Army.  The area around the Menin, Courtrai and Mouscron triangle was to see more intensive battles in the next week of the campaign. Reinforcements for the Coalition had arrived at Tournai, while another strong French corps was approaching Tournai from the SW. The Prussians had moved towards Courtrai, via Mouscron, not knowing of the Austrian surrender. They were met by Pichegru and Jourdan near Mouscron and forced to pull back, although they did take Turcoing. The next few days were rather confusing. The new Austrian/Saxon/Bavarian corps was able to join the Prussians North of Turcoing while the Army of the Duke of Artois (not much more than a division really) was heading up the road from Tournai. Meanwhile the French Army of the Scarpe (their grandly named reinforcements) were also heading towards the Prussians. They brushed aside the Emigres and attacked the rear of the Prussian and Austro-Saxon army outside Turcoing while Pichegru and Jourdan attacked the Prussian and Austrian rearguard just south of Mouscron. The Prussians wrongly identified the French to their South as Emigres so were shocked when they were attacked. The French army also failed to spot the Emigres mentioned earlier who pounced on their rear as they were attacking the Prussians and Austrians. The French were routed and the few survivors pulled back to Lille. Fearful for his life after such an abject failure the French commander Gen Marceau-Desgraviers deserted to the Austrians, as did a regiment of hussars. Meanwhile another battle was going on North of the site of this Prussian victory. Pichegru and Jourdan attacked the Prussians and Austrians vigorously but their troops were beaten back each time they charged, and they were left with no option other than to pull back. Oddly enough this defeat was strategically in their favour.

The Prussians and Austrians (mainly Saxons) now found themselves totally cut off and out of supply as there was no direct route back their depot at Tournai. Abandoning their heavy artillery they retreated back towards Tournai to regroup.

At this point it was fair to award the French the laurels of victory as they had defeated most of the  Coalition forces they’d faced.  The Austrians were out of it. The Prussians, Saxons, Bavarians and Dutch were out of it, and the Hanoverians has been badly beaten. Only the British hadn’t been blooded in battle, with the exception of patrol skirmishes and the odd sortie around Dunkirk. French losses had been high but they remained an army in the field capable of continued action. The Coalition commanders agreed to an end to the campaign. We shall return in 1794, after we’ve played another period to death😂😂😂

Much thanks everyone who took a part in the campaign, including:

Conrad, (Prinz Von Saxe-Coberg-Saalfeld the Coalition Commander in Chief), Paul (FML Count Clerfeyt), Nigel (FML Count Kinsky and then Count Kaunitz after the former was captured), Neil (York), Mike (Conde), Dave ( GL von Knobbelsdorff), John the Red (Houchard), Steve (Pichegru), Shaun (Souham), Richard (Jourdan), John H (Marceau-Desgraviers), and the very remote players Chris in the Cotswolds (Carnot), Mark in Adelaide (Dundas), Ed in Mumbai (Baron Thugut of Austria), Mitch in Gothenburg (the Comte d’Artois) and my wife Katherine for setting up and keeping the technology going. I think that’s everybody. Worthy of note were the self-imposed characteristics adopted by many of the players. Steve was harbouring pro-royalist sympathies (as indeed did the real Pichegru), Neil played a wonderfully erratic Duke of York, Nigel decided Kinsky was going to be a drunkard spending most of his time with his face in a goblet of brandy, Conrad was an excellent ‘do it the way we’ve always done it’  Austrian and Dave a suitably Teutonic and very unlucky Prussian. Paul kept himself to himself so as not be tarred by any brushes that might have hit Coberg as he was second in command of the Austrians and a likely successor to Coberg should he be removed, and John the Red (who had a really good well thought out plan) and the French to  man were aggressive to the point of suicidal when in the spotlight, spurred on by the fear of failure, otherwise certainly Pichegru, possibly the others, had their own agendas. Finally Mike was an excellent Conde, sick of the Austrians fighting to the last Emigre he joined the English who were only busy fighting to the last German. All highly amusing, especially as communications between players was often non existent!

(A postscript. Early in the campaign things had not been moving fast enough for Paris, despite Houchard’s initial victories and strategic acumen (that’s what he said). Nevertheless, Carnot’s agents reported unfavourably of Houchard. A despatch was written (by my good friend Chris down at the other end of the country who was playing Carnot) and sent to the Representative of the People attached to the Armee du Nord, ordering Houchard’s removal and appointing Pichegru as the commander of the army. Houchard was not however recalled to Paris but as an alternative to a personal development interview with the Committee of Public Safety,was offered the command of a division, under Pichegru. The despatch was delayed and did not arrive with the army until 21st September, the day after the campaign concluded).