Amidst the blare of trumpets and the explosions of fireworks (plus the whir of a powerful air purifier amd the gusts of wind through the open skylights) The Burrow opened its doors to put on ‘proper’ game again, the first since March last year; a kind of wargaming test event I guess! I’m hopeful that we won’t have to go through lockdown again, although it wasn’t time wasted as I seem to have generated rather a lot (shed loads actually) of new stuff, including the Late Romans and Goths pictured in earlier posts, and who had their first outing onto the tabletop on Saturday.

I wasn’t sure which set of rules to use. It would have been too easy to opt for Hail Caesar, but decided against them and chose to try out  a set new to me, Sword and Spear. Neil, who knows them well, kindly offered to coach us through the game until we got the hang of it, which in half an hour I think we all did. I don’t yet have quite enough opposition for my Late Romans so Conrad (Ishkabar) offered to supply a Hun contingent (Mongols in reality but not a lot of difference really) and Richard (Praefectus Carceris Claudius Ciceris) supplied some rebellious Late Romans to join with my Ostrogoths (led by Neil as their king, Swarfega) in an alliance against a Roman army led by me (Magister Militum Praesentalis and Dux Fumo Praedium, Maximus Parmo) and ably assisted by Paul (Dux Faceos Paulinus) and Nigel (Dux Nautius Maximus), who’s troops did most of the fighting and dying while I dealt with the Huns and, well, you must read on to find out the outcome.

The game was a straightforward encounter battle on a very bare table (for me anyway!) to avoid complications with terrain and stuff. The Roman plan was to use our massed heavy cavalry to attack the Huns and rive them off while our centre and right held the enemy attack, hopefully long enough for the cavalry to sweep round on the enemy rear after seeing off the Huns. It actually worked after a fashion. The photos as usual pick out the highlights of the game and hopefully provide enough of a narrative to permit the reader to follow the action.  I have to say that with a 4m long tabletop I have little idea what went on over on the other flank, or even much beyond the left of centre. 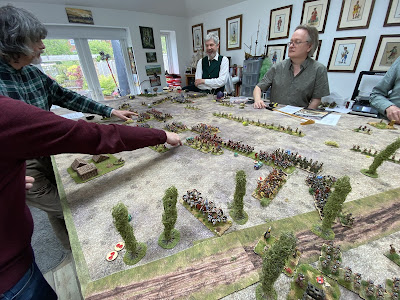 By this time the Huns had all been defeated and the Gothic attack had been repulsed. A quick count up revealed that the allied army had gone beyond its break point so it had to retreat. Victory for us! No doubt the survivors will regroup and try again to overthrow the rightful** Emperor!
The rules are great and I think I speak for everyone when I say we had an excellent game and a perfect way to re-open to Burrow. The rules are simple but require some careful thought when playing, are fast paced and provided many a tense moment. The activation and combat systems are simple and give an excellent game and we'd all picked up the basics after the first turn. The methodology for multi-player games is different to simple one on one games. I doubt very much they’d be as effective if we were all playing remotely as the mechanics of the rules would make pairing of dice etc more than a little cumbersome and a bit of a marathon for the game organiser.
I hope to offer another game next week so better get painting to finish off the Goths I still have cluttering up my painting table, and maybe some more Romans as well........
* Edward Lear
** for as long as it suits me of course.
By Colin Ashton - May 24, 2021