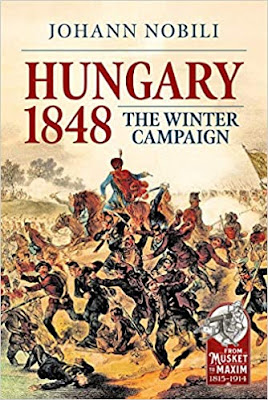 I was really quite thrilled to have the opportunity to review this new book, the latest in Helion’s “Musket to Maxim” series, as I’d been waiting patiently for it’s publication for a while.
The book is a translation of the Austrian semi-official history by Johann Nobili of the invasion of a rebellious Hungary during their fight for independence, through the winter of 1848/49. There is always a danger that translations of nineteenth century (or any century for that matter) work ends up being as dry as dust and sometimes incomprehensible. This is certainly not the case here and Dr. Chris Pringle has done an exceptional job. The translation is sympathetic to modern day readers, not in the least bit heavy going, and is well written and laid out. It is an easy and enjoyable read, to the point that I found myself half way through it in no time.

One of the things that really ‘makes’ the book for me are the numerous and very detailed footnotes. These have been included liberally by Chris to expand in detail upon points that might have otherwise remained unclear from the translation, or people mentioned in the main text. So for example, many thumbnail biographies of those involved on both sides of the revolt appear throughout, so the reader can immerse themselves in the personalities of the campaign. Given how important the commanders were to the way the campaign panned out this is very useful and interesting. I certainly found these footnotes very helpful as it was possible to get to grips with what might otherwise have been a bewildering multitude of perhaps unfamiliar Hapsburg and Hungarian names.

I won’t go into any particular detail on any aspects of the war, and you will have to read the book if you want to learn more. Suffice to say the campaign was marked by a high level of ineptitude and downright disobedience on the part of the Austrians and they made hard work of regaining control of Hungary; their invading force was unceremoniously bundled back to the borders. The situation became so bad that the Emperor had to ask the Russians to help put down the revolt! Not much has been written in English about the Hungarian revolt and every aspect of this phase of the war is covered in great detail, with plenty of excellent and specially drawn maps to help the reader understand the geography and the strategic situation, as well as the battles. Orders of battle can be found throughout, both for the Austrians and the Hungarian army. Remember too that pretty much the entire Hungarian establishment within the pre war Austro-Hungarian army had gone over to the rebels so they inherited a large and effective force at the commencement of the campaign.

So, for anyone with an interest in this war, or indeed of European conflicts during the mid-nineteenth century this book is is the answer. The translation and presentation are very good indeed, so top marks to everyone concerned in getting it to the market, and I look forward to the next volume. In the meantime I shall comfortably (?) resist the temptation to start another project, as if I add anything else substantial to the lead mountain I am dead!
By Colin Ashton - May 05, 2021