More books. How we nicked an army off Napoleon. 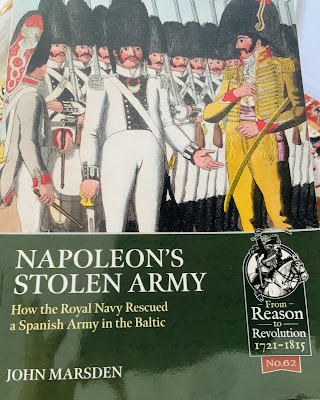 Number 62 of Helion and Company’s ‘From Reason to Revolution’ series is Napoleon’s Stolen Army. How the Royal Navy Rescued a Spanish Army in the Baltic, by John Marsden. Another niche subject, and one I knew nothing much of the detail of this pretty impressive achievement, so was intrigued and eager to find out more. Spain and France were allies at the time a Spanish army of 15000 men under the command of the Marques de Romana was sent to Denmark in 1807. They even saw some action against the Swedes in Swedish Pomerania before being dispersed around mainland Denmark and the Danish archipelago. The situation changed the following year when hostilities broke out between the two former allies after the Spanish citizenry revolted in response to the imprisonment of their Royal family by Napoleon and the placement of his brother Joseph on the throne in their stead. The Spanish troops in Denmark suddenly found themselves in a hostile country hundreds of miles from home. Enter the Royal Navy. The story of the embarkation and repatriation of the bulk of the troops is illuminating and told in detail. The escapade of Lt. Gen. Sir John Moore, commander of a British army expeditionary force in the Baltic, is an amusing aside and one you couldn’t have made up! (Clue: Mad Swedish King and cross dressing, but you must buy the book to find out more!). The naval expedition and the ‘theft’ was much more successful and was quite a feat, and Romana’s experienced army’s contribution to the largely futile Spanish attempts to oust the French from Spain is also told.

The part I found most interesting was the account of the (mis)fortunes of the several thousand men who could not be embarked aboard British shipping to take them back to Spain. Many of these men were drafted into the Regiment Joseph Napoleon and sent to Russia in 1812. Surprisingly, the author has calculated that while the regiment might have ceased to exist as a fighting force, the great majority of men actually made it back home eventually, which is a happy ending to what might have been a very different tale.

This book is well written, benefits from some excellent research, especially Spanish language documents translated by the author, and provides a very readable, engaging and informative account of this episode from the Napoleonic Wars. There is lots of information about which regiments that made up the division, and illustrations are plentiful, the colour plates interesting and the maps especially useful. A book I recommend to Napoleonic aficionados without reservation.