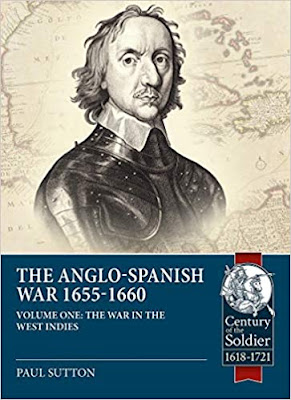 One of a welcome deluge of books emerging from the Helion stables so far this year, No 67 in the Century of the Soldier is ‘The Anglo-Spanish War 1655-1660 Volume 1: The War in the West Indies’ by Paul Sutton. To cut to the chase, this book is excellent, well written and a very engaging and informative read. The level of detail is impressive as we are treated to an almost forensic analysis of the background to the war, the build up to the departure of the expeditionary forces, both the fleet and the army, under the command of Admiral William Penn and General Robert Venables respectively. There are extensive and fascinating chapters covering the composition of the army and the fleet. This, the first expedition to the West Indies, was perhaps unsurprisingly, a disaster in the making. Delays in Barbados and the naivety of the choice of Hispaniola as the primary objective and the unexpectedly tough opposition by the Spanish led to the expedition descending on Jamaica, a softer target. The accounts of the land and naval campaigns are full of detail. As always, I’m always attracted the contemporary accounts which to me add a human dimension that should always be remembered. That is especially the case where, as with this campaign, the human cost in terms of lives lost to combat and primarily disease was appalling, and a sign of things to come for successive generations of British soldiers destined for the West Indies.
The book ends with the occupation of Jamaica; volume 2 will pick up where this leaves off in 1655 to 1662. If it is a good as this volume then it will win a well-deserved place alongside this one on my bookcase.
By Colin Ashton - May 30, 2021