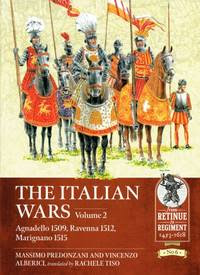 The Italian Wars Volume 2 is the sixth book in Helion and Co’s expanding new series ‘From Retinue to Regiment’ and follows on where the first volume left off. Translated from the original Italian it covers the period up to 1515 and focuses on the battles of Agnadello (1509), Ravenna (1512) and Marignano (1515). Authors Massimo Predonzani and Vincenzo Alberici have given us detailed accounts of these battles, each chosen as examples of the shifting alliances witnessed during those turbulent years (in order, France v Venice, France v Spain/the Papacy, and France v the Swiss).

After some scene setting around the political situation in Italy as it stood after the Battle of Fornovo (Vol 1) we are treated to comprehensive analyses of these three battles, including the events leading up to each, the personages and troops involved, detailed orders of battle, the course of each battle, breakdowns of casualties and the aftermath or consequences of victory or defeat, each linking nicely to the next. The use of contemporary accounts throughout is done well to support the narrative, and the different versions of events as told by the chroniclers is quite revealing and amusingly partisan.

A fair chunk of the book (Chapters 16 to 24) is dedicated to descriptions of the armies of Venice, France, Spain, Naples, the Swiss and the Landsknechts, their commanders and their composition, together with the liveries, ‘uniforms’, heraldic emblems and banners of each of the main protagonists.

There are eight pages of gorgeous colour illustrations by co-author Massimo Predonzani of a variety of troop types and banners, a nice touch being the references to the relevant chapter in the book rather than the usual brief description of the plates at the end of the book. As with all Helion publications of this kind the book is also full of contemporary black and white illustrations and some really useful maps, especially those of each of the battles.

To say that this volume is a mine of useful information is an understatement. I own or have read a great deal on the Italian Wars, but while covering much the same ground I found it an informative and refreshing read. The translation from the original Italian is pretty much flawless and is sympathetic to an English-speaking reader. How does this volume compare to its predecessor? Well, and not wishing to appear to downplay the quality of volume 1, (which was good), this one is excellent and in my opinion a much better book. As such I can recommend this book highly.
By Colin Ashton - May 31, 2021