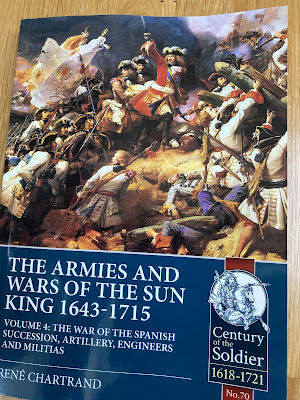 I’m not going to fill this review with superlatives just for the sake of it, but I will use a few, sparingly if needs be.

BEAUTIFUL! That’s what this book is in one word. The fourth and final volume in Rene Chartrand’s almost forensic analysis of the Armies and Wars of the Sun King 1643-1715 covers the War of the Spanish Succession, artillery, engineers and the militias. Helion have published a blinder here, No. 70 in their excellent’Century of the Soldier’ series. Like the preceding three books in this series, this one is the result of painstaking research using a vast range of primary and secondary sources, and it needs its 280-odd pages to give the subject matter justice.

As is my normal expectation with Helion publications, the book contains 32 pages of colour plates, a mixture of specially commissioned work by Ed Dovey, a couple of classic Bob Marrions, and reproductions of earlier works by artists such as Marbot and Delaitre. What with photos of French fortress models and some flags, the colour section is vibrant and really sets the book off; and of course there are a gazzillion black and white mostly contemporary illustrations as well, spread liberally through its pages. There are also some useful maps that tie in well with the narrative.

As the title suggests, the author uses the first half of the book to outline the origins of the War of the Spanish Succession and the course of the war itself in every theatre. The narrative here is well written and gives us a clear if necessarily truncated account of the war, personalities, key moments, battles, sieges etc, and the impact it had on the rest of Europe both during hostilities and at its conclusion.

The other half of the book moves on nicely to the engineers, artillery and militia, and the remaining sections describe the organisation of the French artillery, their uniforms, history and roles of the different types be they field, fortress or coastal. There’s an interesting chapter on engineers, sieges and fortresses in war and then we’re treated to a description of territorial command staff, light troops, gentlemen-cadets, armed constabulary, local reserve troops ad the myriad of different types of militia or civic guards that could be found across France during this period. Each of these militia-type units is described, with their organisation, uniforms and main activities during our period. I would never have imagined that these second, third, fourth or even fifth-line troops could be so diverse in their nature, make up and uniforms, and the information we have presented to us must be the result of some intense and deep amount of research. Finally there are chapters on what are perhaps oddly always my favourite subjects, the human side of this study of the army, through a description of the organisation in place for caring for the bodies and souls of soldiers and on the lives of soldiers’ families, which as ever highlight the trials and tribulations of soldiering during this period. It doesn’t end there as the appendices run off the book with sections on the Bourbon Spanish army of King Filipe V, its dress, organisation and order of battle and last of all a section outlining the Portuguese army of the period.

I wholeheartedly recommend this book, it might even be my favourite of the four. I would say that the is a must for anyone interested in the armies and reign of The Sun King. It is an absolute mine of information, is clearly presented and well written and if you’ve not read the earlier volumes then you should buy them now. I can also see me scrabbling through my scraps box to make up a couple of tiny militia-type units just for the hell of it.