This second edition of The Bavarian Army of the Thirty Years War by Laurence Spring benefits not only from revised text, but a fair amount of additional information as well as 16 pages of colour illustrations, depicting flags, both newly drawn by Matz Elzinga, or photos of originals, together with six pages of super colour illustrations of various troop types  by Sergey Shamenkov. As such it is a much improved piece of work covering in great detail the often overlooked participant in the Thirty Years War, and what the book calls ‘the backbone of the Catholic League’, Bavaria. 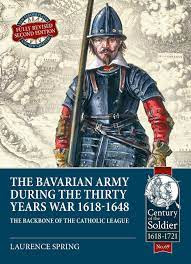 What do we get? Well, a very in depth study of every aspect of the army, including recruitment, through to dress, weapons, organisation, training and supply. I particularly liked the chapters on the militia and on life and death in the army. In terms of the latter it must have been tough and harrowing at times. The example of the unexplained death of some horses being blamed on some soldiers’ wives who were accused, tried and burned for witchcraft is certainly evidence of summary justice at its worst! Monty Python eat your heart out!

The Appendices are especially enlightening. Of these, the first is description of the wonderful 400-year old collection of flags in the Swedish Army Museum, and the second gives us a run down on every regiment that served in the Bavarian army, it’s commanders, actions it took part in and it’s ultimate fate, which is a fascinating subject in its own right for the likes of me. The other appendices give details of all the Protestant colours captured and a break down of the strengths of the various militia companies.

Overall then, I enjoyed this revised edition far more than the original, and not just because of the pictures I hasten to add! It’s just more of a finished work and well worth buying, even if you do have the original.