Revenge of the Goths…………..well almost. 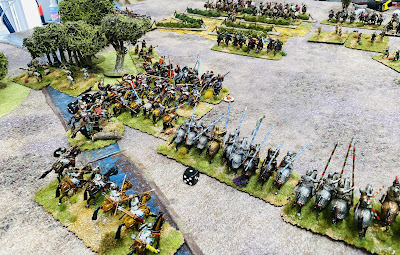 I seem to be falling behind in my posting of late, as this game took place last Saturday 24 July. We (Conrad, Paul, Richard and Nigel and me) are “into” Sword and Spear at the moment so another Late Roman v Goths and some misguided Late Romans was on the table. Conrad Nigel and I were the good Romans. 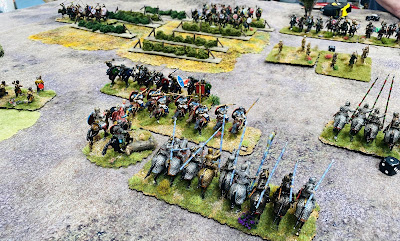 It was another hard fought and enjoyable game, even though my command broke. My memory is a little fuzzy as to the end result. If I remember correctly it was declared to be a marginal Goth victory, but only given that the misguided Roman infantry backing the usurper Richard had yet to be engaged. As noted earlier Richard had fought to the last Goth, and in doing so seriously weakened our infantry and cavalry, leaving them extremely vulnerable to his usurper Roman legios.

PS. I actually had a game during the day this week as well. The other Paul came over and the Goths under my command somehow managed to wreck his centre and left while my left wing held up his cavalry for several turns before being wiped out, who had been intent on rolling up my flank. A rare Gothic victory but no photos of the game as I was too busy engrossed in the game.