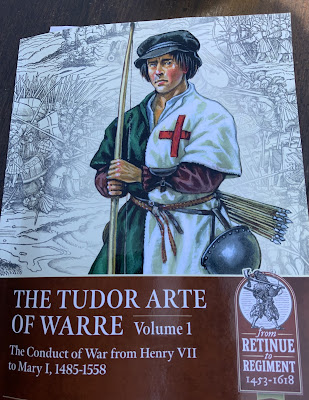 Next in Helion’s Retinue to Regiment series is The Tudor Arte of Warre, volume 1, The Conduct of War from Henry VII to Mary I, 1485-1558 by Jonathan Davies. This book is a comprehensive and authoritative account of the Tudor war machine, warts and all. The author argues that the complexities and generally “different” character of the English army cannot be explained without understanding the wider context within which it is set, such as the political, economic and social constraints of the time.

This volume is sensibly constructed and well written. Three large sections cover firstly,  Politics, Diplomacy, Strategies and Campaigns, then then Armies and lastly the Equipment. The scope of this first volume covers the reigns of Henry VII, Henry VIII, Edward VI and Mary I, and provides us with an excellent introduction to the efforts of the fledgling Tudor dynasty to legitimise itself and overcome every effort from internal and external enemies to overthrow it. This is not a subject I know a great deal about, so for me the information presented was a fascinating insight which brightened up a rather murky period of history, with interesting and enlightening accounts of the various rebellions, wars with the French and of course war with Scotland, the latter punctuated by the crushing English victories of Flodden and Pinkie.

Part 2 covers the armies themselves, from the tactics used to recruitment and discipline. The chapter on the ‘Professional Soldiers” or perhaps lack of them reminded me that the vast bulk of English nobility and yeoman, and all the border Reivers were well practiced in the use of arms even if they were not paid on a full-time basis.  The author’s claim that the Borderers were probably the best light cavalry in Europe at the time is one that I would certainly agree with, not least because my mum’s family were themselves Border Reivers back in the sixteenth and seventeenth centuries. This section puts a strong argument forward the English army was far better than the untrained poorly disciplined rabble of freebooters, dregs of society and Landsknecht mercenaries that many historians would have us believe, and that it was very much fit for purpose.

My favourite chapter is the one covering the supply and support available to Tudor armies. I’m always drawn to the social aspects covered in books such as this. The sections on logistics, administration and purveyancing  make fascinating reading and the level of detail is to be commended. After covering such things as rations and their sources, clothing and accommodation the best part for me is the one covering medical provision and practices. Medical science was certainly no better and probably no worse than 200 years later, but some of the procedures explained in the book when dealing with gunshot wounds and amputation suggest that many barber surgeons knew their trade and practiced it well. However the remedy that required ‘the boiling of two new-born puppies until their bones dissolved’ has thankfully fallen out of use, no matter how successful it might have been.(p.250).

Finally the arms and armour of the army are discussed in some detail, as is the art of military fortifications. The analysis of the gestation or development of the army that is presented by the author is well presented and convincing, and based upon a wide range of primary and other sources.

The book is provided with an excellent series of colour images of re-enactors in a wide range of dress and equipment. There are of course many more excellent black and white illustrations throughout the book together with some useful maps.

Overall then, the book is really easy to read and quite hard to put down. It is of course very informative and is an excellent place to start should one be wishing to study the Tudor armies in any detail. I highly recommended the book and look forward to volume 2 which presumably will cover the reign of Elizabeth I.

The downside of all this is that I am tempted to raise an English army for this period.