Essential Agony: The Battle of Dunbar 1650 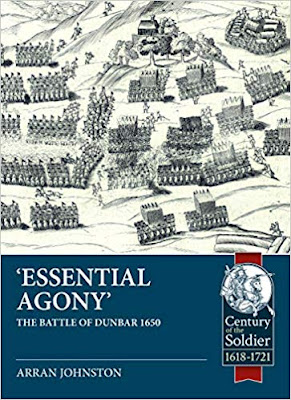 Helion and Co are deluging us with new titles this month! The latest, No. 45 in the Century of the Soldier series is ‘Essential Agony, The Battle of Dunbar 1650’ and what a treat it is too. Very well written, easy to read, well referenced, dozens of contemporary illustrations, present day photographs, informative maps and eight pages of colour paintings depicting the men and some of the flags they carried. There are also a number of appendices containing orders of battle, lists of captured Scots officers and transcriptions of some contemporary correspondence. I used to be 'into' the Civil Wars many years ago but have not wargamed it for probably hundreds of years. There is a distinct danger that I might do so again, but what will be will be. The author has had a couple of other books published by Helion but I think this is his best. He takes his time building up the battle with a detailed account of the convoluted series of events and changes of fortune, beginning in 1648, which led to the armies of two former allies fighting a bloody and bitter battle outside Dunbar in early September 1650. The description of the battle itself is absorbing and contains a mass of detail and by the end of the chapter I felt quite sorry for the Scots as they were outclassed completely. The final chapter of the book finishes the tragedy that were the Civil Wars in the British Isles with the Battle of Worcester exactly one year after Dunbar. Again the Scots are destroyed, but the chapter goes beyond the outcome of the battle to outline the years that followed, Cromwell’s death, the Restoration of Charles II and some background information on how some of the key players at Dunbar ended their days. Overall, an absolutely splendid and informative book. Highly recommended. I am very fortunate and grateful indeed to be sent the occasional volume to review.
By Colin Ashton - September 27, 2019