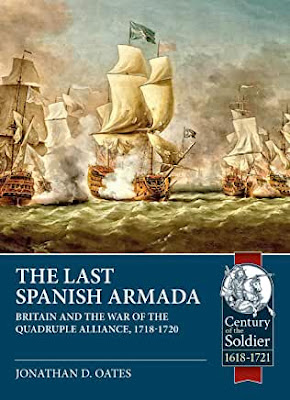 They’re coming fast and furious at the moment, and the latest from Helion and Co. in their Century of the Soldier Series is this splendid offering. The author has written several other books for Helion and is a prolific writer on all of things relating to the Jacobite Rebellions between 1689 and 1746, which have all been excellent reads and full of useful information. This particular publication, The Last Spanish Armada, the War of the Quadruple Alliance 1718-20, is from the same mould. It covers a particularly obscure period of ‘British’ history, during which time the most significant episode to take place on our shores was the Spanish-supported Jacobite rising of 1719 culminating in the Battle of Glenshiel which pretty much scotched the Jacobite plans. The description of the campaign in Scotland takes up much of the book and contains a massive amount of detail (for me anyway). But this is just the keystone of the book. The remainder covers the build up to the outbreak of war, descriptions of the diplomatic wrangling and Spain’s aims, and the almost inevitable commencement of hostilities between Spain on one side and England, France, the Empire, Piedmont and the Dutch Republic. Much of the war was fought in the Mediterranean, such as the Spanish invasion of Sardinia and Sicily and the campaigns in Northen Spain, and these campaigns are covered clearly, again in great detail. There is some basic information on on the armies involved but space probably prevented a more in depth study. As is ever the case with Helion books, it is jam packed full of contemporary pictures, all in black and white, and orders of battle for the navies and armies involved in some of the key engagements, such as Glenshiel and the Battle of Cape Passaro. For me a most informative and enjoyable read, well written and judging by the bibliography well researched using primary and secondary sources. Highly recommended.
By Colin Ashton - September 25, 2019