The First Battle of Froeschwiller, 22 December 1793 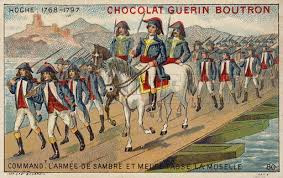 Information about this battle is hard to come by but an article and wargame scenario in an old edition of the French magazine Vae Victis was more than enough to go on, supplemented by other snippets of information found on the internet and my own library. I have no way of knowing if the orders of battle in the magazine are accurate but some cross referencing with Digby Smith’s Napoleonic Wars Data Book, together with more than a pinch of wargamers’ license gave me enough for what I hoped would be a challenging yet interesting game for players on both sides, which is by far the most important objective of any game. What information I did have was converted in Black Powder terminology, with some tweaking to better represent the armies of the early  French Revolutionary Wars and a few period specific house rules (see end of this post) so I was good to go. Froeschwiller was actually the final phase of the wider ranging Battle of Hagenau 18-22 December, and took place a week after the action at Marienthal that John and I played a couple of weeks ago. A brief account Froescwiller can be found here and a more in depth one of the campaign and the fighting around Hagenau here.

The armies were quite evenly balanced numerically, but the Austrian cavalry was much better than their French counterparts. The French regulars I think still held on to some of their pre-revolution drill and discipline, but the rest of the French were battalions of Volunteers and National Guards of very mixed (but generally low) quality. They were well led however, and the French artillery were good. On the Allied side, half the army was made up of an assortment of Hessians, Bavarians and Emigré French. The main advantage for the Allies was their position of defence, but they would I hope be hindered by poor command and manoeuvrability.

Orders of battle and other stuff of interest will be at the end of this post.

So, last Friday, on an unseasonably warm day, some of 'The Burrowers' came over for the game. I'd allocated 'sides' beforehand and sent out briefing packs, requiring, from the French at least, an outline plan and order of march. John the Red and Dave 'Monsieur Gervais' were the French while Matt, Paul S and Jim were the Allies, with Paul in overall command. The French would be entering from the top of the map between Langensoultzbach and the far side of Netwiller, while the Allies were strung out from Froeschwiller to below Gersdorf. The Austrians on the Northern side of the river would not be allowed to move until the river was crossed by the French.

We ran out of time after over four hours of play (plus planning, lunch and chatter) and 14 game turns. The Allies had technically won on points as they still held Froeschwiller and Woerth. Casualties, in terms of lost or shaken units had been remarkably light but the French won a tactical victory by their successes on both flanks, which would have forced the Allies to pull back, which historically is what happened. One thing that niggled me throughout the game was that despite having a table over four metres long all the action took place at both ends, with very little going on in the centre. It was only when the Allies pushed their cavalry forward into the space that anything really happened in the middle two metres of the battlefield!

I have to say I was pleased with the way the game turned out, even if it wasn't at all like I had imagined. I would have gone for an overwhelming attack in the centre, crushing it and relying on the slowness of the Allies on the flanks to respond effectively. Everyone said they enjoyed the game and the day as a whole which as ever goes a long way in pushing all my buttons. I get a great deal of satisfaction out of planning these games and out of the enjoyment everyone voices in taking part, even when the dice roll against them.  As ever Black Powder worked satisfactorily, although we had to look up a couple of rules due to brain fog at various stages of the day. I know they're not everyone's cup of tea but they produce a good game with plenty of stress, anxiety and excitement.

I have a follow up to this battle planned for next Saturday, when I shall be attempting the Battle of Wissembourg 25/26 December 1793 ici. Well part of it at any rate.

As promised here are the orders of battle and other stuff that formed the briefing packs for each army:

Reinforcements – The Duke of Brunswick (9) TURN 6 MAYBE? (they never arrived) *

Your force is part of a larger Allied army that earlier this year successfully invaded Alsace and drove the Republican French from the region. To the north the Prussians defeated the Army of the Moselle under Hoche but failed to capitalise on their victory and began withdrawing into winter quarters. A counter offensive by the now unengaged Army of the Moselle which slipped away from under the noses of the Prussian, and the Army of the Rhine has been steadily pushing your forces back towards the North Eastern border over the past week, inflicting a number of costly defeats on isolated elements of the Allied army. There have been four days of fighting around Hagenau a few miles to the South, beginning with the destruction of your reaguard at Marienthal, which continues. You form the right flank of the entire Allies army under the command of General der Kavallerie Wurmser. The French Army of the Moselle is known to be advancing from the North West in an attempt to turn the Allies’ flank thus forcing them to make another withdrawal. You must hold Froeschwiller , Woerth and Gersdorf and prevent the enemy from taking control of the Leibfrauenburg (the high ground in the bottom left quarter of the map). Preventing the destruction of your army while destroying that of the French would also be an acceptable goal. In the event of a withdrawal you must protect your line of retreat towards Lembach.

The Army of the Moselle has slipped away from the Prussians despite being defeated at Kaiserslauten at the end of the November. You have force marched through the Vosges mountains to support General Pichegru’s Army of the Rhine which is engaged against General Wurmser’s Austrian and Allied army. The enemy have been steadily pushed back in a North Eastern direction and towards the Eastern border of Alsace and for the past four days, beginning with the complete rout of the Austrian rearguard at Marienthal, have been fighting a fierce series of actions to the south of this position around Hagenau. This fighting continues. The enemy facing you is the right wing of the Allied army. Your success in defeating this force and effectively turning their flank would force the entire Reactionary and Counter Revolutionary Slaves of the Autocrats’ army to make another withdrawal. You have Citizen Louis Antoine Saint-Just of the Committee of Public Safety with you providing ‘guidance’. He executed a general only last week (the 19th so far in 1793) as an example to the others for simply commanding some troops that were forced to withdraw. Be warned.

Points (applicable to both armies):

1. Grazing fire is applicable as per BP Albion Triumphant

3. Uphill in melee gives +1 in combat resolution. Does not apply if unit looses prior melee round

4. All ‘linear’ armies are restricted to moving in line or column of march, unless assaulting a fortified position or built up area . All infantry in line move at a maximum of 9”

6. Conscripts/Gd Nat/Volunteers moving into a ‘swarm’ (skirmish order) must remain in this formation for the remainder of the game.

7. ‘Masse’ is a modified form of open order depicted by leaving a small gap of 1-2cm between each base. It moves at 12” and can evade as the battalion is not trying to maintain a formation.

a. It shoots and melees with a -1 modifier

b. Enemy artillery does not get the column bonus for targeting it.

c. A battalion moves from close order column to column of mob (Masse) when: 8. All volunteer/Levée units must pass a command test if they wish to form square (or indeed NOT to form square). If they fail they must take an immediate break test and if they stand are classed as a disordered square. If they are forced to retreat but are still hit by the chargers they are removed from play immediately.

9. All units wishing and able to evade must pass a command test as per the rules. Volunteers/Levée that fail must take a break test.

10. Cavalry moving over difficult terrain must check to see if they are disordered. A 6 on 1D6 and they become disordered at the end of their first move and must halt.

11. The move sequence is amended to the following:

b. Units that shoot get a -1 to their commander’s ability when testing to move.

12. 'Mini CinCs' are normally divisional commanders who confer a re-roll for command rolls for any brigadiers under their command, once per turn. The ONLY order a CinC/mini CinC can ever give (with the exception of disliked/useless ones) is a 'follow me'.
By Colin Ashton - September 22, 2019