Following on from the earlier post, yesterday I played another couple of moves of the encounter at the town of Bissinghen, sitting roughly half way between Courtrai and Menin on the River Lys.

The Emigre Army of the Conde (no more than a strongish division in the campaign) was being attacked by a corps of Republicans under General Pichegru. The latter had immediately launched an all-out attack in an attempt to destroy the isolated Emigres before the Austrians could intervene. The latter were known to have been on the opposite bank of the Lys the previous day, and had commenced the construction of two pontoon bridges facing Bissinghen. I don’t know the size of this place in 1793 but as it appears on my contemporary map of the Austrian Netherlands I’m assuming it was a town rather than a mere village.

As this is part of an ongoing battle within a campaign where players are largely in the dark as to what’s going on elsewhere in the area of operations I’m only sharing the information that the two commanders (Conde and Pichegru) plus the Austrians who are supposedly ‘rushing’ to save their Coalition buddies. (Austrian armies of this era rarely rush anywhere of course). So the commentaries may be somewhat briefer than normal. Fear not however as a more comprehensive report will appear once the battle has been decided. The photos show the position at the end of T4.


Well, that’s all for now as I won’t be playing any more turns until later this afternoon. Lots of unanswered questions. Will the faltering Emigres rally? Will the bridge be completed? Or will it be destroyed by enemy cannon fire?  Have the Austrians noticed the battle on the opposite bank? You, and I for that matter, will have to wait and see. 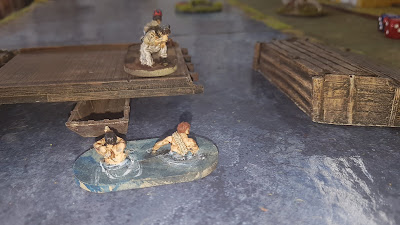 (No sheep or rabbits were harmed during the battle, so far anyway).
By Colin Ashton - April 17, 2020